I never thought the day would come, but Megan Fox and I actually have something in common (apart from our mutual infatuation with Megan Fox): Both her and my little sister have a tattoo addiction.

Depending on the source, Fox is known to have upwards of nine tattoos spread across her body — some of which come in the form of Shakespeare quotes (“We will all laugh at gilded butterflies” – a quote from King Lear), some are just symbols (a pink flamingo on her upper thigh) and some, well, were all in the name of love (the name Brian — for former fiance Brian Austin Green — is scrolled right above her cha-cha).

However, according to the new cover of Empire magazine (just released online), it would appear Fox can now add a new tattoo to her ever-growing repertoire.

If you look closely, you’ll see an Autobot symbol on her shoulder … even though her wild ways should probably earn the gal something more Decepticon-ish.

Looks like Ms. Fox is throwing some love at the franchise that made her — except, NO, it’s a recycled image and Empire simply photoshopped an Autobot symbol onto her shoulder.

What gives dudes! So much for a little geek love from the slut-tastic star, huh. Check out a larger image of the steamy new Empire cover below, and a sneak peak at the issue — which hits stands this Thursday and includes new photos from some big summer films (like Pelham 123). 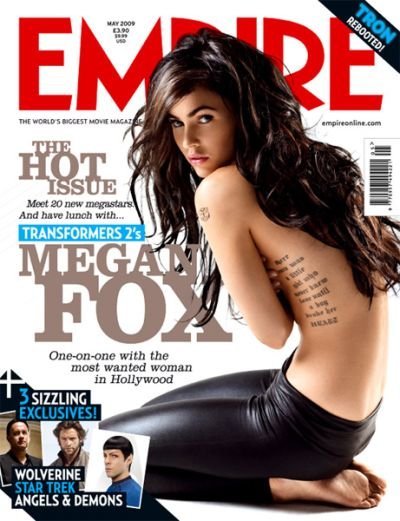