Romance "Nights in Rodanthe," starring Richard Gere and Diane Lane, opened in the No. 2 spot with $13.6 million while suspenseful "Lakeview Terrace" landed at No. 3 with $7 million, dropping 53 percent from last week when it topped the chart. Its cumulative total now stands at $25.7 million.

A third new release, "Fireproof," starring Kirk Cameron as a man trying to save his marriage, opened well for independent distributor Samuel Goldwyn Films by reaching No. 4 with $6.5 million for an average of $7,700 in just 839 theaters. 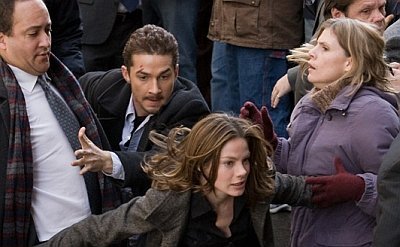 Rounding out the top five was Coen Bros. comedy "Burn After Reading" with Brad Pitt and George Clooney. It collected $6.2 million bringing its total to $45 million after three weeks.

Overall ticket sales rose to $102 million from $90.8 million on the same weekend last year, as "Eagle Eye" brought some relief to studio executives who have seen the collective box office down from last year in eight of the past 11 weeks. 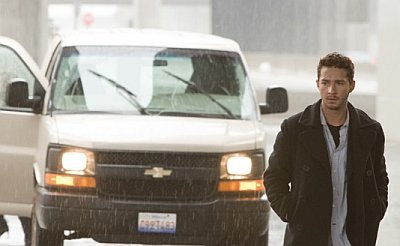 "We've had a tough go of it in comparison to last year's lineup," said Paul Dergarabedian, president of box office watcher Media By Numbers. "'Eagle Eye' was a perfect antidote to this fall malaise we've seen. It was a summer-style thriller."

The fourth new wide release was director Spike Lee's World War Two drama "Miracle at St. Anna." But it failed to spark moviegoers' imagination and landed in the No. 9 position with $3.5 million in ticket sales. It earned an average of just under $3 million per theater in nearly 1,200 venues.

Elsewhere, the top 10 weekend movies were marked by holdovers from previous weeks. Animated "Igor" claimed the No. 6 spot, dropping only 30 percent from last week to $5.5 million for the weekend and $14.3 million overall after two weeks.

Finishing off was No. 10 film, Tyler Perry's "The Family That Preys," which earned $3.2 million to pull its three-week total to $32.8 million.

DreamWorks and Paramount Pictures are units of Viacom Inc. "Rodanthe" was distributed by Warner Bros., part of Time Warner Inc, and "Lakeview Terrace" by Screen Gems, part of the film and TV wing of Sony Corp.

"My Best Friend's Girl" and "The Family That Preys" were released by Lionsgate, a unit of Lions Gate Entertainment Corp. "Miracle at St. Anna" was put out by the film distribution wing of The Walt Disney Co..