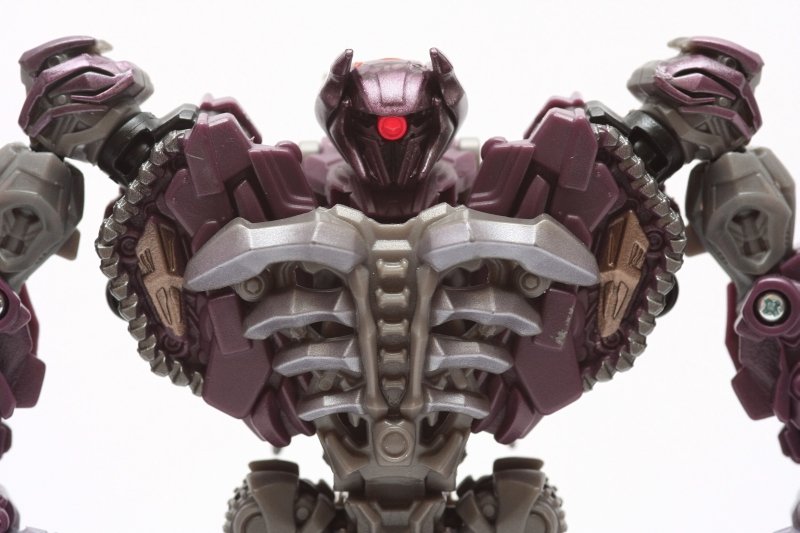 What can I say about this much loved G1 homage toy? He is well anticipated by fans, and this prominent figure in the Decepticon forces is making a brief (but sweet comeback) in the Transformers Dark of The Moon movie. Though having to go through many cosmetic changes from different Transformers toyline, Shockwave still manage to retain it’s signature features most notably his cyclops eye, arm cannon and purple colour! Thanks to Michael Bay, he fulfilled many fanboy’s dream of seeing this menacing G1 character back in live-action form. 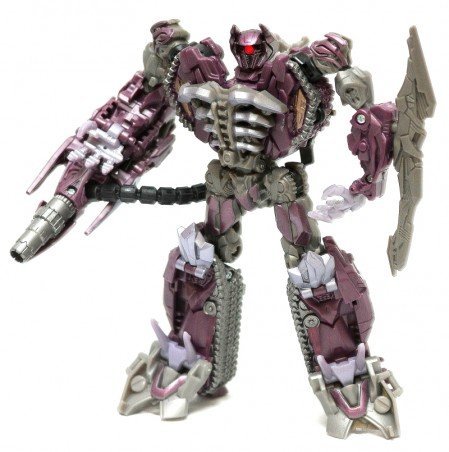 DOTM Shockwave was released in May 2011 and is part of the second wave batch of MechTech voyagers. I would have wanted him to come as part of the leader class IMHO. Let’s anticipate that this will happen! He is packed in a standard voyager sized DOTM packaging. No known multipacks available at the moment but during the time of this writing, another redeco of him has been sighted in China known as Crystal Shockwave.

His bio sounded sinister enough that it suggested how menacing Shockwave can be as any Autobot that caught sight of him will not survive to foretell their ordeals to the others. Everything about him is just too dark!

In contrary to his G1 form as a gun, DOTM Shockwave transforms into a Cybertronian tank. The tank is an asymmetrical type tank with its turret located on the left side of the tank. His battle cannon becomes part of the turret with a tube connected to his back (pack). The tube is compatible with any MechTech port that you can find. 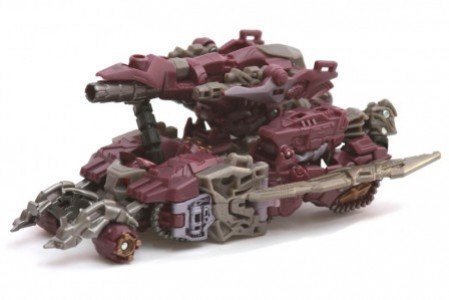 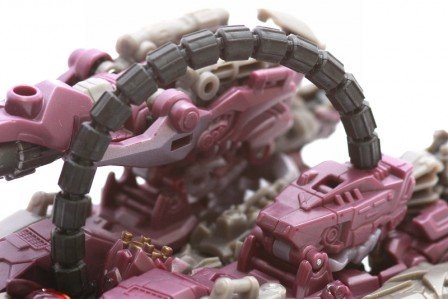 There’s a battle blade that comes with him which was positioned on his left hand. In tank mode, the blade behaves like a drive-through slice and dice mechanism. The blade position is inter-changable where MechTech port is present. However the cannon is not inter-changable as it was made only compatible for his right-hand. 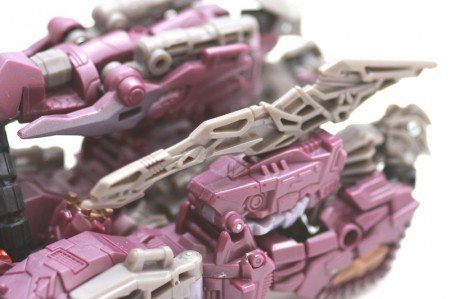 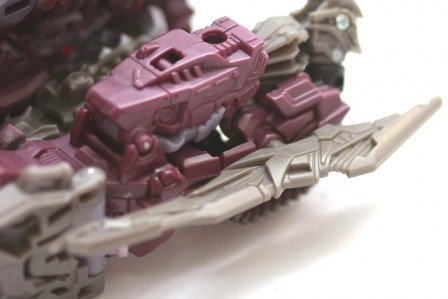 In alternate mode, Shockwave’s head placement is obscured by a mask. The head placement is almost similar as ROTF Megatron’s. The frontal part of the tank is a pair of pincers. Though it doesn’t look anything like a bulldozer’s scoop, it clearly suggest that those pincers are the one responsible leaving the trail of destruction whenever Shockwave overran any Autobot bastion. 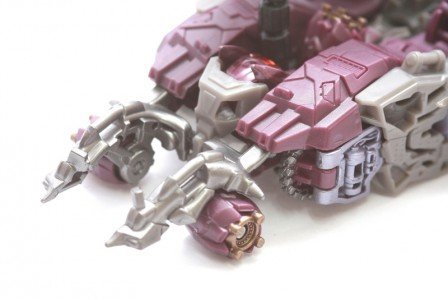 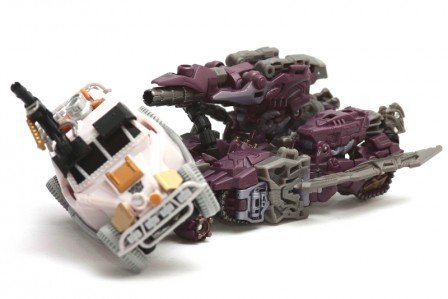 He comes with spinnable wheels that comes in a pair on the front; near the pincers and some smaller ones under the static treads to give that thread motion effect. Shockwave rolls well on the surface, almost smoothly.

Just like any typical tank, Shockwave’s turret can rotate freely giving him the ‘seek and destroy’ impact. His Mechtech feature can be activated by pressing on the rear lever. The result of this is more blades and cannon barrels popping-out for extra fire power and destruction! The lever can be locked by slotting in the tab to retain it’s ‘battle mode’ position. 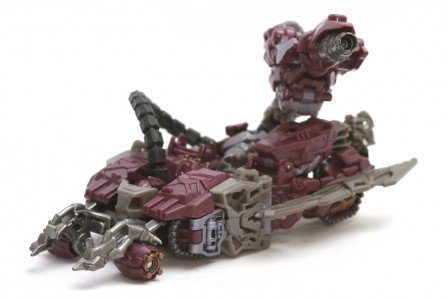 He is a great addition for tank and Cybertronian vehicle lovers.

In robot mode he is stands around 17cm tall. His figure is proportionate as his body strata and torso all looks balanced and complement each limbs. He is super articulated with 6 POAs from hands to shoulder, 1 POA on the head and 4 POAs for the legs. 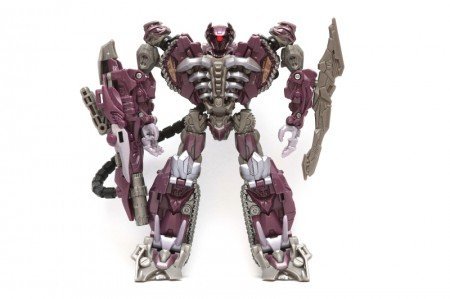 What is cool about his eye is the light that it emits. No battery operated LED is needed though for that extra glaring effect. His head sculpt almost resembled a bat with protruding ‘ears’ (whatever you call it).

To transform him to robot mode, there is two significant parts that you need to focus on. The first one is the bottom half which is the legs, torso and second is the body that encompasses the frontal rib cage and the backpack. The wheels as backpack is spinnable. The third ‘wheel’ is static. 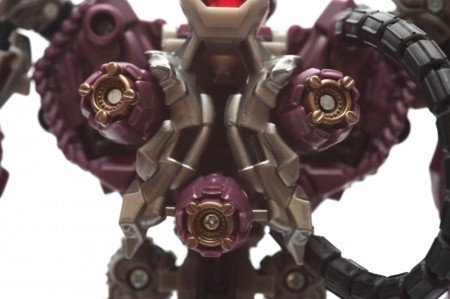 Also interesting about Shockwave is the amount of C-joint rungs that he possesses. They were almost available on every part of his figure. He had one on his left hand, a pair on his feet, a pair on his cannons and another pair on his backpack. This is ideal for holding up C-joint accessories introduced in Generations/RTS toyline.

As for MechTech ports, they are available on his left arm, right arm, two on the back shoulders, one on the cannon and one on the backpack. 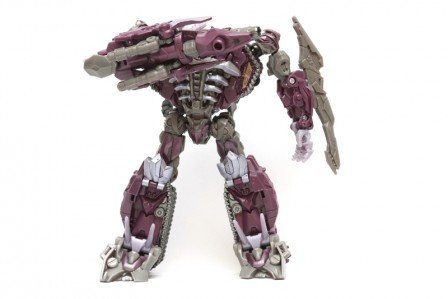 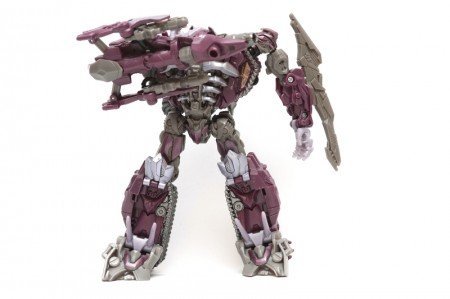 While most fans is rejoicing his release, there is one ugly part of him that most fanboys would want some rectification if possible which is the ugly screws being positioned in a facing out position instead of concealing it at the back. This is most visible on the forearms. Though interchange it is possible but it is useless as the palms that is molded to the hands can’t be interchanged. Also the cannon is specially fitted on the right forearm, and by fitting them on left forearm is almost useless. The blade can only be used on one side as the other side of the blade is full of hollow gaps.

Though still retaining most aesthetics of G1, he appear to be more menacing with his Cybertronian-alien looks with rock solid-like sculpts most visible on his body, back and arms. I bet it will do good for camouflaging among the rocks for that kind of structure! His bat-like headsculpt reflects more on his sinister side. Cold blooded and brute with his power pack ready for total destruction.

Super articulated with 6 POAs from the whole arm, 1 POA on the head and 4 POAs for the legs. The head is on a swivel and 360 degrees rotation is possible. The arms and shoulders can rotate 360. The palms can do 180 and the elbow can do 90. The legs can do free range of bending. Any action pose is almost possible with DOTM Shockwave.

Retains G1 originality with Michael Bay’s touch-ups on the cosmetic side to complement the Bayformers theme. The designs is also very dark, menacing and full of character. Mass shifting is no longer a logic in Bayformers realm, therefore a Cybertronian tank as alternate mode suffices.

Not much on both modes. The main gimmicks are centred on the MechTech cannon that he is holding. The push and lock lever will activate extra barrels and bayonet-like blades. The backpack with tri-partite rollies adds the coolness factor in him. He can do awesome poses and he will definitely made a good feature in dioramas. In alternate mode his turret can be rotated and the hose is inter-changable from (MechTech) port to port. His pincer-like spoilers gives those menacing look while he is rolling.

He is coated with his signature colour – deep purple which is the most dominant, followed by dark grey for a metallic effect and lilac coloured palms, knee-cap and the spiky foot insteps. His MechTech cannon is dominantly purple and dark grey. His eyes are translucent red, ideal for emitting light.

He is one of the best DOTM voyagers IMHO with multiple poses equipped with an ideally cool MechTech weapon. His tank mode is an ideal lineup with all other Decepticon tank fleet. He made an excellent piece for display too which is already a fun factor.

Transformation segments concentrated on two parts – body which is the upper half and the legs which is the bottom half. The legs are easy to work with vice versa (robot and alternate mode). and pretty straight forward. The part that you must give extra care is not to over snap the connectors to the tank treads when you are lowering the treads for the tank mode. The connectors that snaps firmly to the tread tend to be a bit tight.  Other than that, the arms and cannons snaps pretty firmly and splits firmly too.

I got mine for RM85 which is a bargain. With a homage this good down memory lane for a G1 fanboy like me, this is just awesome.

The paintjob is spot on. Love it to the max. Can’t imagine other substitute other than this colour scheme. Choice of MechTech weapon is ideal. Is like  a match from heaven. Posability is superb and impressive, it displays beautifully whenever you want him. Choice of alternate mode is ideal too. The days of mass-shifting is over. Only down side is the pincers and wheels. I would prefer full-tread for the front and back with a full bulldozer-like scoop! Despite one onus, the rest of the best redeems everything. This guy must be your top five wants for DOTM!