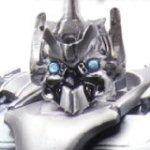 Jolt transforms into a black and grayish-blue Chevy Volt, with Allspark blue-colored decals, as well as the black on the roof and hood being textured to resemble carbon-fiber panels. His robot mode is now much more accurate, with his chest and feet deformed and collapsed, more slender limbs, claw “hands” with three digits each, and his back kibble forming his distinctive “wings”. Despite all of this, his head is still based off of his more common, shrimpy design instead of his CG design.

Replacing his electro-whips, he comes with a MechTech blaster that turns into a hand cannon when the scope is pulled. This weapon can either be plugged on two “concealed” holes on his roof in vehicle mode, or on his wrists and underneath his forearms in robot mode. It can also be pegged on the hole on his back in robot mode. As with all other MechTech Deluxe weapons, the converted weapon cannot lock into place. Additionally, flipping out a tab in each of his arms reveals some small C joint-compatible bars.