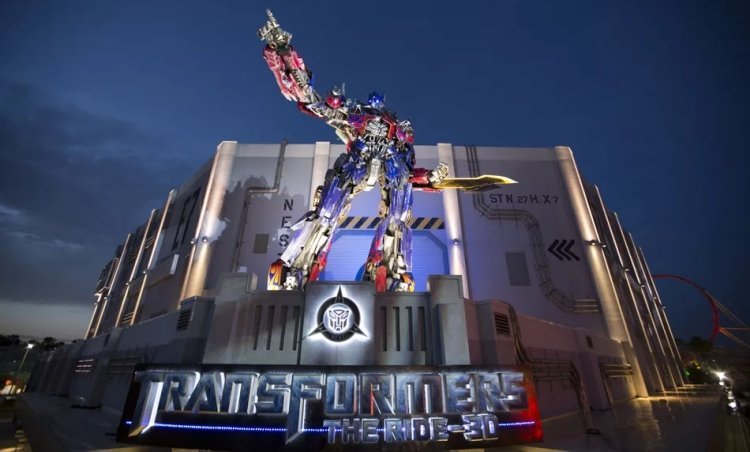 There might not be a “Transformers” movie engaging you in theaters this summer, but that doesn’t mean you won’t be able to watch Optimus Prime fend off Megatron and the rest of the Decepticons in a new adventure. Universal Hollywood is opening the doors for “Transformers: The Ride” on May 25, and I got a chance to check out the attraction over the weekend.

The 3D HD ride is similar in style to “The Amazing Adventures of Spider-Man” in Universal Orlando, but ramped up a notch so it’s as involved as “Harry Potter and the Forbidden Journey” is. Your objective is to protect the AllSpark from Megatron, and you team up with a new Autobot named Evac to do so. Evac is a clever addition to the “Transformers” line-up because he is also conveniently your escape vehicle (read: he’s the car you travel in through the ride).

Along the way you meet up with Bumblebee, Optimus Prime and various other Autobots, all the while evading Megatron, Devastator and Starscream. You’re hurled through a city while trying to get the AllSpark to safety, and Universal’s robot arm technology and 3D effects do a great job of making you feel like you’re right in on the action. Even though this isn’t a roller coaster, don’t think it’s a ride just for kids. It definitely whips you around a bit, so victims of motion sickness be warned.

While the story isn’t technically “Transformers” canon, it’s definitely in keeping with Michael Bay‘s movies. The Autobots and Decepticons transform between their forms as smoothly as they do in his films, though that’s likely because Bay served as “Transformers: The Ride’s” creative consultant. The attraction touts original, photo-realistic 3D-HD media, a new elaborate flight simulation system and special effects crafted by Industrial Light & Magic.

The wait time was about 130 minutes when I checked out the attraction close to close on Sunday evening, so I can only imagine how insane the line will be once the ride actually opens its doors. But it’s worth the wait, especially if you’re a fan of the “Transformers” series. It really does feel like you’re right there in the middle of one of the movies. Who knows, maybe Bay will skip doing 3D for “Transformers 4” and just have it roll out on a 4D action ride. We would be totally okay with that.

There’s also an array of merchandise to check out after your ride is complete. I was a fan of the “Robots in disguise” mustache shirt and Optimus Prime helmet, but you can find an array of magnets, shirts and toys to appease any “Transformers” fan.

When I walked up to go on the ride, there was an opportunity to snap photos with Bumblebee taking place. Both he and Optimus Prime are scheduled to pop up next to the ride throughout the day to pose with fans, though unfortunately they didn’t seem quite ready to transform in front of us. Maybe Bumblebee was just feeling shy or something.

“Transformers: The Ride” opened in Singapore late last year. This attraction seems to be pretty much the same as the one at that Universal, though the queue might be a little bit different. If you’re a “Transformers” fan and find yourself around either Universal Studios theme park, I’d definitely suggest going to check out the ride.