Megan Fox sizzles on the red carpet at the world premiere of Transformers: Revenge of the Fallen in Tokyo. The stunning 23-year-old showed hundreds of Japanese fans what ex boyfriend Brian Austin Green is missing as she flashed her leg through her purple gown.
Fox has reportedly split with the Beverly Hills 90210 actor for a second time after calling off their engagement in February.
But the end of that five-year relationship looked like the last thing on her mind as she posed for pictures and sipped champagne alongside her Transformers love interest Shia LaBeouf.
The pair, who reprise their roles playing teenage couple Sam Witwicky and Mikaela Banes in the new film, were pictured cracking jokes. LaBoef sparked rumours there could be more to their on-screen chemistry in a recent interview.
The actor said: “We’re attracted to each other, and I think you can see that in our scenes together. It’s very real and tangible, and you can tell something exists. 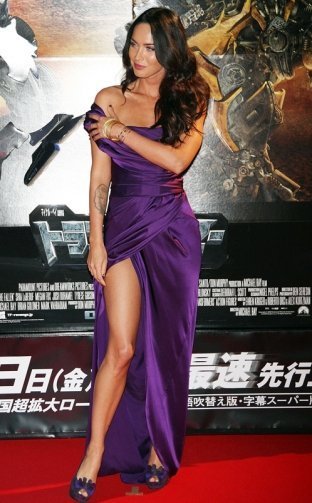