The series is slated to return on March 14th in Canada, and (hopefully) sometime next month in the states. Rodimus Prime
Nicknamed "the chosen one", Rodimus Prime is an Autobot prodigy seemingly on the fast track to becoming Magnus. He is well-liked, a natural leader and skilled in both hand-to-hand fighting and various weapons. His signature energy bow is a weapon of his own personal design. 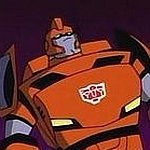 Ironhide
A good natured bot from a small rural region of Cybertron, whose sense of humor sometimes gets a little crude. Ironhide possesses the ability to transform his exterior into a super dense and near indestructible alloy capable of resisting almost any impact or blast. 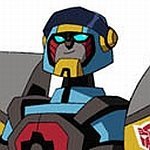 Hot Shot
Hot Shot is Rodimus Prime's equivalent of Bumblebee – an inexperienced young *|*bot who lives life in the fast lane and has a habit of diving in a fight head-first without thinking of the consequences. He possesses flame powers derived from welding torches in his arms. Perceptor
Perceptor is a member of the Autobot Ministry of Science on Cybertron. One of his greatest achievements is the successful completion of Ultra Magnus' Project: Safeguard – the creation of the flying Autobots, Jetfire and Jetstorm. 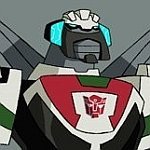 Wheeljack
Wheeljack is a member of the Autobot Ministry of Science, and a part of the team responsible for creating the first flying Autobots, Jetfire and Jetstorm. Strika
Megatron's general of destruction, and consort of Lugnut. She combines immense strength with a keen tactical mind and is considered one of the Decepticon's greatest strategists, guiding their forces to many victories in the Great War. Blackout
A legendary Decepticon juggernaut who reputedly single handedly took down many Omega Sentinels. Covered in weaponry, few Autobots have ever seen this gigantic Decepticon and told the tale. 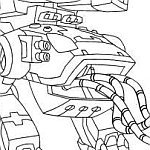 Spittor
A disgusting, lazy, dishonest and above all, bad smelling Decepticon. Spittor transforms into an all-terrain walker which can snare opponents and swallow them to be either digested or coated in extremely explosive slime to be spat out as a living bomb.