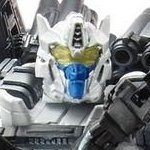 Skyhammer transforms into a hybrid assault helicopter assumingly between a Eurocopter Tiger and a Mil Mi-24. Being one of the supreme air commanders in Cybertron, Skyhammer was gifted with boisterous MechTech weapon that converts from a rifle to an Energon Sword.

In alternate mode, his pair of detachable missile pods underneath his copter wings adds more firepower. His hands can fit both weapons and comes with an extra MechTech port on each of his wings, one underneath his cockpit, one on both sides of his Mechtech weapon, and one on the backs of each of his shoulder cockpit halves.