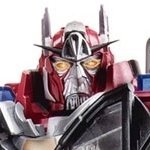 In robot mode, he is equipped with extended firefighting boom arm, a small flip-up nozzle on the front fender, and some electronic features such as siren lights and sounds, activated by a small grey button on the roof of the cabin.

As for weapons, he comes wielding a double-bladed Primax Blade that stores underneath the grey panels forming the roof of much of the vehicle, while the MechTech shield is stored under the truck.

On the MechTech side, he comes with a double 5mm post hole MechTech ports in this mode; the one on the right hand side of the vehicle has a button inside, that when pushed inas in plugging the weapon, it activates a weapon sound effect.

In alternate mode, he can be set to an attack mode by opening panels on the rearward sides of the vehicle to expose hidden weapons and two more MechTech ports, activating the MechTech Shield’s Bladed Blaster mode (by pressing the large panel on it marked by the Cyberglyphics) and attaching that to the vehicle MechTech ports, and clipping the Primax Blade’s handle into the two tabs on top of the Shield/Bladed Blaster’s turret.

In robot mode, when the button on Sentinel Prime’s chest is pushed, his eyes light up, his chin moves and he says “I am Sentinel Prime!” Two more phrases, “Good to see you alive, Optimus.” and “What has happened to the AllSpark?” are heard when a weapon is inserted into the MechTech port with the button inside of it and the chest button pushed.

Sentinel has four more 5mm MechTech ports in robot mode, one each on either shoulder and one each on either forearm. If that’s still not enough, the screw holes under his wrists can accommodate 5mm weapons as well, for a total of eight weapons beyond those included with the figure. The Primax Blade and Shield can both be held via their respective handles in either of Sentinel’s articulated hands; the shield can also be plugged into the MechTech port in Sentinel’s forearms.