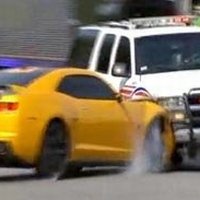 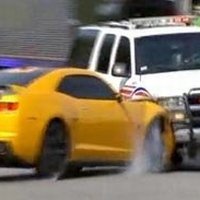 Well, that happened. The injury and accident-plagued set of ‘Transformers 3’ had another bad day on Monday when a Washington, D.C. police SUV inadvertently became part of a high speed car chase and collided epically with a yellow Chevy Camaro, known in the franchise as “Bumblebee.”

In stunning video from MyFoxDC.com, a caravan of ‘Transformers 3’ vehicles were driving down 3rd Street and Maryland Ave. when, in the distance, a white police car entered the shot. When it reached the intersection, poor Bumblebee zoomed into the scene and smashed into the corner of the SUV. It played out like a textbook car crash you see in hundreds of films, only this time it wasn’t in the script.

According to police sources, the officer in the car was responding to a call about a suspicious package incident nearby. The unnamed officer was taken to a local hospital with minor injuries. Thankfully, no bystanders were hurt, but it’s unknown if the stunt driver was harmed.

Shooting of the film in D.C. has been postponed until further notice.

This isn’t the first freak accident on the set of a ‘Transformers’ movie. In September, an extra named Gabriella Cedillo was seriously injured while driving her own car in a scene while a stunt vehicle drove in the opposite direction. A cable towing one of the stunt cars came loose and sliced through Cedillo’s car window, striking her in the head.

Cedillo underwent surgery, but her lawyer says she is still unable to speak and is paralyzed on her left side. She is suing Paramount for more than $50,000.

As for other accidents, leading man Shia LeBeouf was nearly blinded by a prop while shooting ‘Transformers 2.’