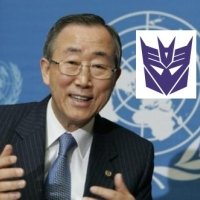 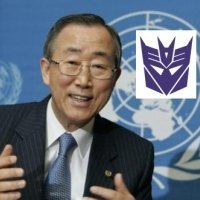 Transformers 3 is filming in the UN today. The middle section of the General Assembly hall was full of extras, in suits and native dress, while a camera on a mechanical arm panned the crowd and then the three faux speakers on the rostrum. From the photo booth on the GA’s third floor, Inner City Press heard stage directions, saw the vote tally board lit up.

After learning indirectly of the project, Inner City Press on November 9 asked the head of the UN’s Department of Public Information Kiyotaka Akasaka why nothing had been publicly said about the movie filming. Mr. Akasaka told Inner City Press he did not know about the filming.

There has been less and less transparency about how UN decisions are taken, during Ban Ki-moon’s now four years as Secretary General. As Inner City Press has exclusively reported, an event in the Dag Hammarskjold Library auditorium was sponsored by the Trump Group.

Once exposed, the printed programs for the event were taken away and Inner City Press was told to “ask Kazakhstan” about the event.

When musician Taylor Swift bragged that she was launching her new album “at the UN” on October 25, Inner City Press asked who had approved it. “Ask Aramark,” the cafeteria contractor, Inner City Press was told. 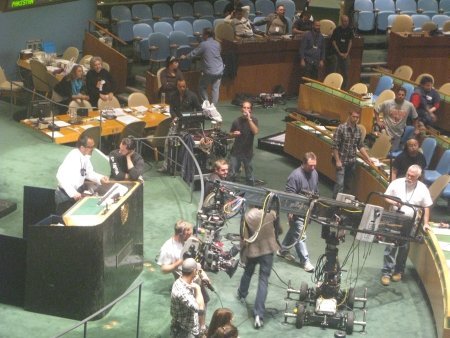 Ultimately the event was canceled — not because the UN had any standards, but because VH-1 didn’t like the venue. A Central Park concert was held instead.

So who approved the Transformers use of the UN, and why not only was it not announced, but did Ban Ki-moon’s head of Public Information claim not to know about it?

When Ban’s spokespeople have been asked to whom in the Chinese government Ban ostensibly raised human rights, and maybe even the name of Nobel Peace Prize winner Liu Xiaobo, the answer has been that some things are better left unsaid. But why say you weren’t aware of something you were? As one source asked, has Ban Ki-moon become a Decepticon?