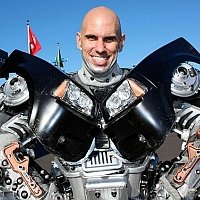 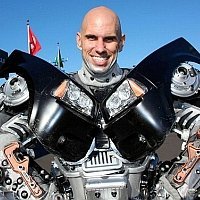 A former military pilot has taken to New York City’s streets in this Transformers costume he made himself out of household items.

It is made from hundreds of random domestic items including spatulas, toothbrush holders, sewing machine parts, toilet brushes and even a pooper scooper.

The Autobot fan now travels around his home city of New York attending corporate and public events and greeting stunned members of the public.
Peter came up with the inventive idea in 2008 when he was invited to a sea-themed fancy dress party.

He spent hours creating a cross between Optimus Prime and a squid using small household tools sold in convenience stores.

After getting pats on the back for his efforts, Peter decided to build a full exoskeleton based on Optimus Prime.He has now built four – including this original creation, the incredible Brooklyn Ironhide.

His shins are large pooper scoopers, there are a number of bird feeders over the body and each cannon has a toilet brush holder on it. 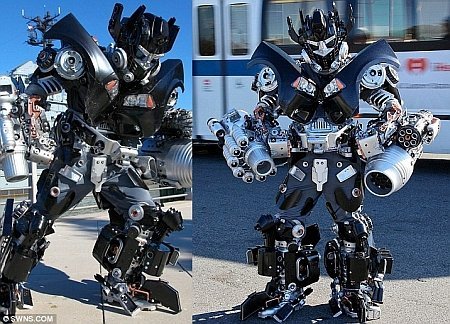 He said: ‘No single part of any of my exoskeletons is particularly expensive, but all those little parts add up, even though many come from cheap discount stores.

‘Sometimes I see something – a paper towel holder, a soap dish, contact lens case, whatever – and I immediately know what I want to do with it.

‘Other times I see something and am struck by its interesting shape, and I buy it for some future use, or the part doesn’t work out so I throw it away.’

It took the 49-year-old 600 hours over a 13 month period to create Brooklyn Ironhide – and even then he wasn’t happy with the final results.

So he went back to the drawing board and spent a further 75 hours perfecting the armoured suit, which has cost ‘thousands’ of dollars in total.

The artist and sculptor now attends private and corporate parties and promotional events as the Autobot through his company Brooklyn RobotWords – as well as meeting members of the public while suited up. 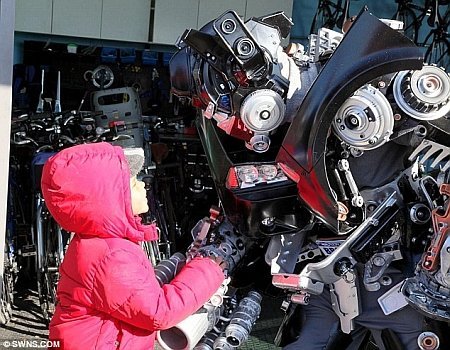 He said: ‘It is a very physically and emotionally exhausting endeavour. Performing in very heavy, unventilated suit of armour is quite challenging at 49, so I have to spend a lot of time in the gym.

‘Little kids are in awe of the Transformer, sometimes hugging at the legs and screaming they love me.
‘The little ones who have seen the films and comics often think I’m real – although I can’t imagine what it must be like for a four-year-old old when Brooklyn Ironhide is standing over him.

‘I was recently dressed as Ironhide and with a boy who was about four when his six-year-old older sister started throwing rocks at me to protect him. I thought that was cool.

‘Dogs usually growl at me, though the other day I had a dog licking Bumblebee’s face.’