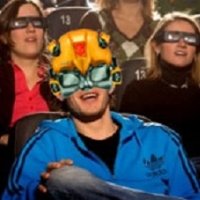 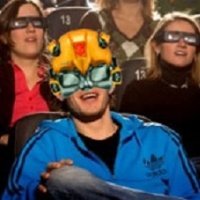 Toy companies aren’t immune to the recent wave of custom passive 3D glasses. Hot on the heels of Oakley and Gucci, Hasbro just announced its own line of designer 3D glasses for kids. However, they won’t be glasses; they’ll be face masks.

And they won’t have curved, stylish lines; they’ll have robots.

Hasbro has decided to jump on the 3D bandwagon by introducing their own line of Transformers Cine-Power 3D Masks, which will become available in conjunction with the July 1st release of Transformers: Dark of the Moon.

These new plastic Autobot Face Masks will come in the guise of Optimus Prime and Bumblebee, complete with custom passive 3D lenses that are built into the front.

The cine-Power 3D Masks will work at any RealD equipped movie theater, and they are also compatible with the Vizio Cinema 3D HDTVs and other passive 3D HDTVs.

The Transformers Cine-Power 3D Masks will retail for $9.99, which is considerably cheaper than a lot of the 3D HDTV glasses on the market at this time. The masks will begin shipping to stores nationwide on May 16th, six weeks before Transformers: Dark of the Moon debuts in theaters.

You can check out the Optimus Prime Cine-Power 3D Mask in the photo below: Rosie: Role Is Actually A Surprise