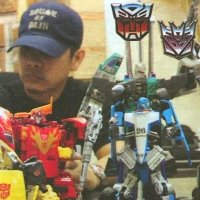 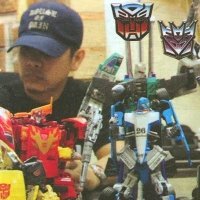 Our resident pro kitbasher – customiser Wan de Real does it again. Known as one of the most professional kitbashers in Malaysia, Wan de Real was interviewed and featured by Gempak Starz magazine recently. The coverage in the magazine consists of a 3 page exclusive eye-to-eye interview that took nearly 6 hours to complete.


Wan de Real managed to mesmerize the journo in the hot seat by staying put in reporting the details and the in-depths of Wan’s precious hobby. The article covers mainly about the history and background of how Wan first get involved, a talk about how he design and work on his stuffs, and his achievements so far.

Unbeknownst to many, Wan started off as a small time designer of card board vehicles for small school projects in his younger days. The interest blossomed into something big after the release of the Transformers live action movie in 2007.

The story walks readers into the minds of a creative designer playing about his tools at work perfecting each and every personal projects and commissioned work given to him. Other subjects mentioned is his plans of extending this hobby. For more spoilers of what work in progress that Wan is undergoing, do read the following articles below!

For those who is not familiar with Wan’s projects, the article features a plethora of Wan’s individual projects as well as commissioned works. Among them was the recently prized Masterpiece Astrotrain that won him the title of the best custom Transformers of the month for November 2010.

Not giving up easily, the journo coaxed Wan into transforming his winning Masterpiece Astrotrain in the midst of interview. Not disappointing them, Wan managed to transform it in mere 15 minutes showing the Gempak Starz journo that this Masterpiece and the rest of his customs are toys that is not the one to be messing with!

Wan de Real has certainly done TransMY and Malaysia proud for his contributions to the Malaysian Transformers community. Support him by frequenting his blog, De Real Transworks to catch up with his latest news and projects. For more details, read them all here. (large jpg file, take sometime to load, but it is worth reading!)

Dark Of The Moon Trailer Out, Description Spot-On