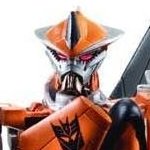 Terradive delights in using every dirty trick to claim victory against the Autobots, even destroying human landmarks to distract them. The only thing he likes more is claiming all the glory for said victory. He’s quite skilled in personal combat, as well; he is highly adept in the use of his trident, although he’ll lose his nerve if he’s disarmed.

His fellow Decepticons secretly loathe him, except for Jetblade, Terradive’s only friend. Terradive won’t hesitate to use his naive admirer as cannon fodder if the situation warrants it, but he truly does appreciate Jetblade’s friendship. With Jetblade, he’s hidden amongst Earth aircraft – but when they spot the slow-moving Tomahawk, the temptation to strike may just be too strong for a glory hound like Terradive to resist.