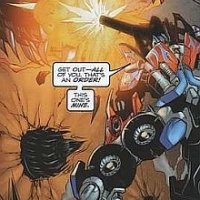 Trip Back Into The Transformers Past

An eye opening article by Shaun Noordin of The Star regarding the origins of Megatron and Optimus Prime rivalry. Read on:

Ever wondered how the rivalry between Optimus Prime and Megatron began? We love the Transformers. In our younger days – which is to say, last week – we’d spend hours playing with the toys, making “krik krak krik kruk!” sound effects while transforming robots into cars and back.

We love everything about the Transformers, and we can tell you odd bits of trivia like who were the first combiners (the Constructicons), what was Bumblebee’s original alt-form (Volkswagen Beetle), and the name of Optimus’ old girlfriend (Ariel/Elita One). We’re sure you have friends like us. 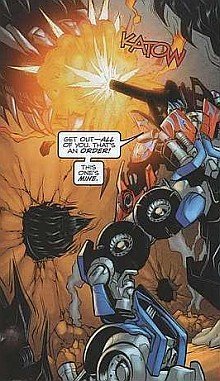 Back then we were friends? Not?

This is because the Transformers comics have an incredibly storied history and possess way, way more depth than what you’d expect from a series that stars robots blasting the ever-loving snot out of each other.

This brings us to the three Transformers comics that we’re reviewing today. Local publishers Pelican have licensed these titles from IDW Publishing, making them affordable for the masses here. They’re all tied to the live-action Dark Of The Moon movie, but while their on-screen counterparts are content with engaging in chaotic melees of explosions and lasers, the robots in the comics instead focus on character development, drama and storytelling.

Transformers: Dark Of The Moon: Foundation explores Optimus and Megatron’s violent “sibling rivalry” back on Cybertron, while they were still under the mentorship of Sentinel Prime. It’s an engaging story that takes us into the minds of the two great leaders; here, we see Prime’s internal struggle to be “the good guy” in a ruthless civil war, and we learn why Megatron loathes his “brother” so much.

Meanwhile, in Rising Storm, we get a peek at the upcoming challenges that the Autobots will have to face in Dark Of The Moon.

Rising Storm doesn’t develop the characters as much as Foundation did, but it does tease us with an inkling of the sinister plot that the Decepticons have cooked up.

This is a comic book that’s not afraid to blow up a few well-liked characters to highlight the dangers and tension in the Autobot-Decepticon war, and it firmly establishes Shockwave as a cold, logical, villainous badass. All said, Rising Storm’s greatest achievement is that its story of trials and triumph made us anticipate the movie more eagerly than even the movie trailers could.

Both these prequel comics add a juicy layer of characterisation to the robots you’d only recognise in the movies as “the pink one that turns into a motorbike” or “that F-16 guy”. Unfortunately, the comics also add a lot of complexity.

Foundation and Rising Storm have links to not just the Dark Of The Moon movie, but also to the various comics and adaptations that surround the entire Transformers series. So, there are plenty of details and backstory that a new reader will miss out on. The standalone story arcs in each book will still be enjoyable, but you might start asking questions like “Why are the Arcee sisters three separate-but-connected robots?” or “What’s the deal with the Autobot Science Division and the Cybertronian Defence Force on Cybertron?” (Answer: read all the adaptation and prequel comics for the previous two movies.)

Ironically, while the prequel tie-ins add a lot of extra flavour and narrative context to the overall story of the Transformers, the Dark Of The Moon Movie Adaptation itself is something that’s best avoided altogether.

The Movie Adaptation isn’t bad per se, it just attempts to do the impossible: it tries to create a sensible story out of what’s essentially a glorious festival of action, explosions and CGI effects, as directed by Michael Bay.

That’s like asking Shakespeare to script a play about wrestling; the action portrayed in the adaptation will never match up to the real thing, and any attempt to weave in a narrative of tragedy and the triumph of the human spirit (or robotic spark) will be muddled by the fact the source material’s really just about people beating up one another.

Our recommendation is for you to pick up Foundation and Rising Storm if you’re a big fan of the Transformers series. The Movie Adaptation, meanwhile, should be best skipped in favour of actually watching the movie.

There are a lot of things in these comics that’ll keep the Transformer lover in you happy, but if they aren’t enough then you can do what we’re doing right now: playing with the toys while waiting to get tickets for Dark Of The Moon.