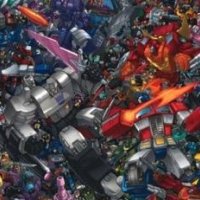 Much Less Than Meets The Eye

I’m not the biggest Transformers fan. Well, I was when I was a child, like most of us, simply because the toys were fun to play with. After all, that’s all Transformers was – a toy whose premise had to be explained by creating a television show around it with the absolute flimsiest of plots. Just like GI Joe. Just like Power Rangers. Just like Pokemon (Okay, so Pokemon is not the worst show ever…). Since then, I’ve only seen the new movies, which have only shown me that Michael Bay is a bigger danger to this country than Al Qaeda.

But since Activision has been ceaselessly hyping the new game Transformers: War For Cybertron, I have decided to break my silence in a new feature, I like to call “Evan Jacobs: There, I Said It.”

Now, everyone extols the Transformers movie of 1986, which is set in the distant future, 2005. I saw the Transformers movie when I was too young to remember it, but it seems to be a bit revolutionary, featuring the deaths of many Autobots including Optimus Prime. I do praise any children’s movie which contains robot murder. However, this does not change the fact that Transformers, at its base, makes absolutely no sense at all.

Let’s start with War For Cybertron. Here, we see the Transformers battling on their home “planet” of Cybertron, which already raises some questions. It turns out, and I had to do a fair amount of research for this, Cybertron is the body of the second-ever Transformer, Primus, who was created by the “sentient core of the universe” (sigh) to fight the first-ever Transfomer, Unicron (no, not “unicorn”), after he had destroyed the previous universe (yawn). Primus then created the Transformers.

While biological life can spontaneously be created, synthetic life needs at least a sentient being to create it. So where did Unicron come from? And furthermore, if Unicron was alive before the universe started, why does he look like a human being? Why does he have a face? Why do any of the Transformers have faces? They’re machines. Biologically, faces make sense, but when it comes to robots, all the rules go out the window. If a human being had created transformers initially, then it would have made sense to make Transformers look like people. That would have been a great explanation for the existence of Transformers. But no. Instead: Unicron, Primus, and all that other crap.

Secondly, how are Transformers capable of reproduction? There seem to be a lot of them. That’s strange in itself, considering there are few FEMALE TRANSFORMERS. Sexist much, Hasbro? Of course, it’s not like there are a ton of girls playing around with Transformers, but even He-Man had She-Ra. And she was badass. Obviously, the Transformers are either hermaphroditic, reproducing with two sets of metal sex organs, or completely asexual, like amoebas. I prefer the former, because I am entertained by the ideas of Transformers humping. (Okay, so according to Wikipedia it’s this process called “budding” which sounds like asexual reproduction, but again, all my brain sees is Optimus passionately kissing Bumblebee).

Okay, so Cybertron by itself is a huge leap in logic that the Transformers franchise is asking us to make, but so be it. I can accept that. Unicron is God. Fine. Here’s what I can’t accept. On Cybertron, TRANSFORMERS TRANSFORM!

So, what’s wrong with that?

Well, here’s a question: why? Why would you need to hide your appearance on Cybertron? Whatever your answer is, it’s wrong, because the truth is that there is no reason to hide your appearance. Perhaps they are transforming to make them better at something, such as flying or driving or lawn-mowing or whatever. But couldn’t they just have evolved to have wheels on their feet? And can’t they fly anyway? And why are they transforming into things that look like human-made objects? What’s worse is that the little cars and planes that these re-imagined Transformers turn into have little spots that look like windshields. Didn’t anyone look at that and say: “Hey Shingo, why is there a windshield on that car there’s never going to be anybody sitting inside it?” Can someone explain that to me? Oh right, selling toys. Sorry, I forgot.

I will quickly skirt over the weird fact that Transformers speak to each other. They each have computers for brains, can fly at FTL through space (apparently), and have AI, so why can’t they have a simple wi-fi connection with each other. You’d think that all communication would be telepathic. Also, why do transformers use separate weapons? It’s not like they use their fingers as much as we do. There aren’t any Transfomer typists or Sculptors, as far as I know. Why not just make your whole arm a sword? I guess Optimus did that in the movie, but in the War For Cybertron game, he definitely has an axe like in the original cartoon.

War For Cybertron claims it is a re-imagining of Transformers, and will be darker, and grittier than ever. Yeah, okay. It’s funny how this re-imagining looks pretty much like how Transformers have always looked. Now Activision is slowly telling us which characters will be in the game, and again, as not the biggest Transformer fan, I can’t tell the difference between any of them. Especially now that the movies have made them look even more alike. The problem is not that I don’t know the Transformers well enough, the problem is that there really ISN’T that much difference between any of the transformers. They are all big and boxy and none have a personality to speak of. Even Jazz’s semi-racist utterings are completely forgettable and unable to convey character.

Now, this isn’t saying that Transformers: War For Cybertron will be a bad game. On the contrary, the trailers and gameplay videos have looked quite beautiful and fun, and I (read: someone else) look forward to playing it online.

My problem isn’t with the game. It’s with the Transformers. And here’s the biggest problem of all. Why Transform? Why even Transform at all? Sure, the ones on earth want to stay hidden. But then they transform when they fight too. I have yet to see one of the vehicles be more effective in battle than its giant robot form. And besides, if the Transformers were so keen on staying hidden, they sure do seem to transform in broad daylight, in front of many people, nearly all of the time. I’ve seen a fair amount of Transformers episodes; subtlety, stealth, and surreptitiousness seem to be absent from most of their everyday dealings. If they were so concerned with being hidden, why not just make themselves really small, like that one tape-cassette Transformer. Wait, he doesn’t exist anymore? Oh, sorry. All I’m saying is that if they can create themselves in any image that they desire (they can) and they can make themselves small (they can), then why come to earth as gigantic friggin’ robots?

Besides, if you subscribe to the “robots in disguise” theory of transformation, then what’s the deal with Beast Wars? Or the Dinobots? Even when they’re transformed they’re just different kinds of giant robots. That’s stupid, right? Right!

And Megatron turning into a gun? Even when I was a kid I knew that was stupid. Not only does he turn into a gun, but then he has to shrink himself so another Transformer can hold him and operate his “trigger.” Beside being robo-homoerotic, that just seems like a redundant, worthless transformation. I mean, Megatron could just get a regular gun. Oh, you’re going to say when he’s a gun he’s super powerful? Maybe you should transform your interests into something better, like, say, Pokemon.

You might say that I’m just picking on small logical errors that, on the whole, don’t affect the enjoyment of the entire whole. But when a mythos is created upon these kinds of errors, they taint the entire universe like a few drops of poison in a Mountain Dew. How am I supposed relate to or care about the fates of characters when I’m still questioning why they exist in the first place? These flaws, although some may be more serious than others, indicate a much deeper flaw, a fundamental flaw, in the Transformers universe itself. That is the flaw of poorly thought-out premise.

There, I said it.

Okay, Transformers fans, put me in my place. Why am I wrong? (I’m not.) What did I miss in my argument? Should I be crucified, or simply burned at a stake?