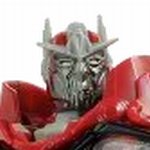 Sentinel Prime surprised fans by making a comeback as a downsized version of his most anticipated leader class version. he was fitted in as the third wave of Transformers Dark of the Moon MechTech voyagers.

Just like the leader class, Sentinel transforms into a Rosenbauer Panther airport fire truck. His water cannon becomes a MechTech cannon that can be activated via a pull of lever in his vehicle mode. He also comes with a small gun flipped out from the front.

This voyager class emulates the Cyberverse version that had Autobot symbols scratched out by purpose as to portray his treacherous behaviour by collaborating with the Decepticons.   Ironically his bio does not reflect otherwise.