Fans Give Bumblebee The Sting 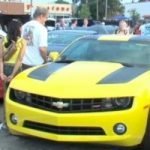 You don’t have to speak Cybertronian to understand what’s so rad about the latest special edition Transformers package for the 2012 Chevrolet Camaro.

In the video posted on GM’s official Youtube page, Mr. Barry gives a tour around the vehicle designed to look like Bumblebee from Transformers 3 Dark of the Moon, including the stylized Cybertronian letters that spell “Transformers” below the right headlight and the rear deck lid.

When this car shows up in your review mirror, you’ll definitely do a double take, and then some! Bold yellow paint with pumped up black stripes, a high-wing rear spoiler and black-on-black wheels, this car looks like Bumblebee, straight from the set of Transformers: Dark of the Moon. It’s enough to make Sam Witwicky‘s heart beat fast.

“It’s so cool to see little five-year olds standing in front of the car saying, ‘Wake up, wake up.’ And, I’ll ask them, ‘Who do you want to wake up?’ And, they’ll say ‘Bumblebee,’” says Adam Barry, Senior Creative Manager, Corvette and Camaro, Accessories and Specialty Builds.

A self-described “Transformers geek” who still has his Autobot action figures, Barry says that when he found out about the project, he jumped all over it. “There’s no question that this specialty package was designed by someone who loves, Transformers,” says Barry.

It’s the little details — like Cybertronian symbols spelling “Transformers” on the spoiler, Autobot logos on the wheel caps and front quarter panel and an awesome interior with black leather seats and bright yellow stitching — that give this Chevrolet extra attitude.

You can order the Transformers Specialty package now. It’s due in dealerships in September.