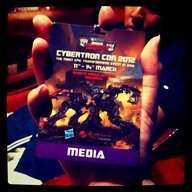 Today is the eve of Cybertron Con 2012, the moment for fans and organizers have been waiting for – the setup! Just like our previous exhibition, we in TransMY felt that the setup is one of the most fun and memorable moment for any Transformers fanboy involved in this exhibition of this scale.

Since not much happening in the internet, some visitors or supposedly ‘crews’ or bloggers that was invited for the media preview has released some photos apparently pictures of the ongoing activity happening now during the Cybertron Con setup eve.

Check them out below:

Twitterers @superadrianme posted this via yfrog of his phone.

Optimus on a different angle by Island Diva @syzzlyn

A clear and sharper pic of 22 foot Optimus Prime was shared by @ewenboey via his Instagram;

Sharper pic of Optimus Prime thanks to @ewenboey

Curious to see how Compass Ballroom of RWS looks like? Thanks to Darren Kang @deekay, we got a pic of the entrance to the event area.

MP Ultra Magnus toy on display at Cybertron Con during media preview as they were still putting up the toy booths. We might get a glimpse of more photos on displays soon!

There you go, all the early snips of the Cybertron Con eve. Expect more photos up by tonite and as for now, if you have no clue of what Cybertron Con is, do read on.

Cybertron Con is a visually stunning exhibit of Transformers toys, and will include activities for fans to experience a wide variety of offerings from Hasbro’s toy line and entertainment. This Cybertron Con held in Resort World Sentosa is the first Transformers Cybertron Con to be held in Southeast Asia.

You can get the tickets online via www.rwsentosa.com OR at Universal Studios Singapore ticketing booths OR at RWS Ticket and Membership Hub and finally, via hotline 6577 8888 .

The types of tickets available consist of 2 types:

Sales and promotional packages that are available is The Epic Battle Package is a complete 3D2N Transformers experience comprising hotel accommodation, a pair of one-day passes to Universal Studios Singapore, admission to the Transformers Cybertron Con 2012, and the Maritime Experiential Museum & Aquarium (MEMA).

Besides that, The Battle Pass consists of tickets to Universal Studios Singapore and Cybertron Con, available at $77 (Adult), $62 (Child) and $48 (Senior Citizen).