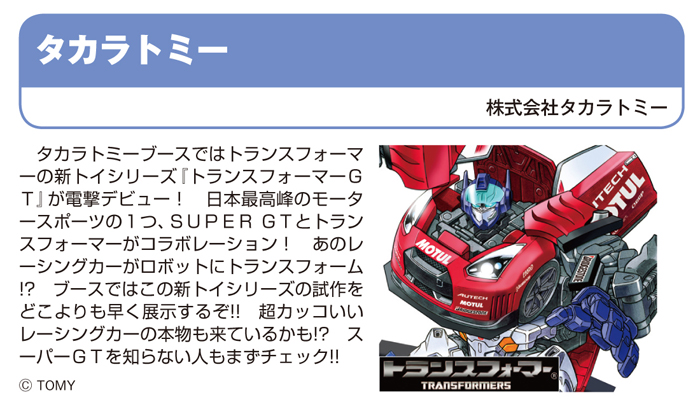 Lucky not into Alternity... :p

Autobase Aichi reports that a new prototype of a previously unknown Transformers sub-series, Transformers GT, will be shown off at Dengeki's 20th anniversary festival at Makuhari Messe convention centre on October 20-21.

It is currently not known if this is going to be an entire series of new toys, or just a one-shot a la the Transformers X Bathing Ape BAPE Convoy crossover releases. What is confirmed is that this "Transformers GT" will be a version of Alternity Convoy Nissan GT-R, redone in the Super GT Race version of the car with sponsor logos.

A picture of the toy in both its modes has been posted - it is a heavily modified version of Alternity Convoy. Check out the pictures attached to this story.

We fortunately will not have long to wait before the truth is revealed to us! Yes, sure Takara, u haven't milk the mold enough already

Can't stand the insinuation? Shut up so there's nothing to be insinuate about They're coming out in 3 figure per set maybe? 🙁

Autobase Aichi has posted some additional information on the Transformers GT Alternity series. They have confirmed what was previously speculated about the toys having new weapons - GT Prime has an Optimus Prime rifle which transforms into an impact wrench, while GT Star Saber has his signature Saber Blade, which transforms into a refueling machine.

Release details have also been revealed by Autobase Aichi. The first two releases in the series will be GT Prime and GT Saber in March 2013. GT Maximus, the third Fortress Maximus version, is as yet unconfirmed. By way of the Takara-Tomy Facebook page and the Twitter account of @ToYz80 we've got a look at the real lineup for the Takara-Tomy Transformers GT series (ignore our post from yesterday, that particular lineup was apparently fake).

Shown off at Dengeki's 20th anniversary festival at Makuhari Messe convention centre are three variants on the remolded Alternity Convoy body type - one as Convoy / Optimus Prime himself, with a green and white version shown representing a Fortress Maximus Super GT and a Star Saber Super GT in blue. The names are apparently GT-R Prime, GT-R Maximus and GT-R Saber respectively.

Check out the images of Saber and Maximus by reading on with this story. There's also three girls pictured in the colors of the three robots - we're not sure if these are meant to be driver / partner figures a la the Binaltech Asterisk / Human Alliance series or merely a part of the series marketing and backstory.

Images have been shown in the post by Bro unexistence!

They better not release these in set OR Japan exclusive 😛

But if in set, still can kowtim,
if Japan exclusive die laa T_T

New Transformers X - Alternity line! Preorders are up for the first figure in the series, Transformers X - Super GT1 and GT2! We're not sure what the difference will be between each GT, as Takara sent the same picture for both. But this new line has quite a jump in price for the Alternity line (10,000 yen retail in Japan).