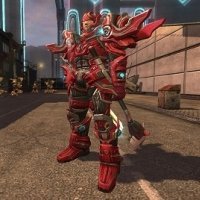 Transformers in gaming has been seen as a healthy growth recently with MMO’s emerging claiming fame or possibly tie themselves in the franchise for a full market boost. While Transformers Universe MMO news has been a widespread, another Transformers game development called City of Transformers has been looming closely.

We have heard of Transformers MMO called Transformers Universe which was heavily endorsed by Hasbro but not to mix the two, City of Transformers is a spin-off but not involving Hasbro (just yet). They might very soon as the name is part of their IP.

In MMORPG.com, they claimed that ‘City of Transformers’ takes place in “an ‘alternate’ Transformers universe. The story was set upon the world of a distant planet, Amicron, that once survived a bloody war with Quintessons.

The game play is all about what the legacy that the Quintesson have left in Amicron where you as a human was given the ability to control a mech, called a Transformer, to assist you in your war campaign.

The gameplay video will quickly make you realize that this sci-fi MMO is just a random MMO where they incorporated the Transformers title to get more attention. From what we see it, they are liable to be sued by Hasbro as this gave with this name was created independently far away from Hasbro’s knowledge.

The parties responsible for this game – Destiny Development and Huoca have announced that a new free to play MMO based on this title is slated to begin beta testing sometime later this month.

The game play provided six classes of characters gifted with more than 80 abilities, where a player tasked to fight enemies and defend Artifacts that keep a multitude of secrets. The events unfold in 21 regions of the planet, where various trials and dangers await the heroes.

The main attraction of the game is an incredible opportunity to visit the Moon, and travel to the past and the future. By knowing one of Spark’s secrets, a player can control transformers – unique machines that enhance a player’s fighting abilities.

The game has more than 50 kinds of transformers characters which is a plethora to choose from. Two players can use them as a means of transportation simultaneously. For those who want to earn gaming money, there are 11 professions that allow them to gain resources and make different items, equipment, potions, fine cuisine dishes, and even their own transformers. Players can also sell them at a commodity exchange or auction.

While true fans might cringe over this because of the non-Hasbro affiliation that this game currently stands, ardent MMO fanatics will find this appealing and welcoming.