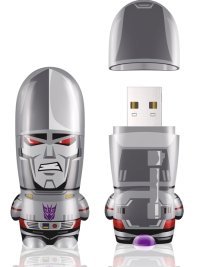 The popularity of the Transformers franchise has create awareness of many consumer products to jump into the bandwagon not missing the opportunity to cash some buck on Transformers related product. Megan Fox may have seen the exit prior to the Transformers Dark of The Moon filming, but that ain’t going to stop companies from releasing Transformers merchandises. 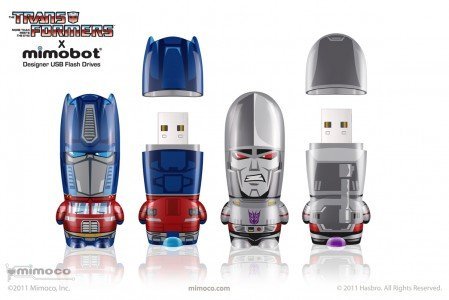 Mimobot like other licensee came up with their new series dubbed as the Transformers X, which include the characters Optimus Prime and Megatron. Both coated in a colored armor based on their respective homage colour schemes.

They both come in capacities ranging from 2GB to 16GB and they also come preloaded with special MimoDesk specific content such as wallpapers, icons, screensavers, and other digital extras. The only downside is there is no Transformers: Dark of the Moon goodies with these little guys. One thing is for sure, fans won’t get any faithfully departed Megan Fox pics for free in those units.