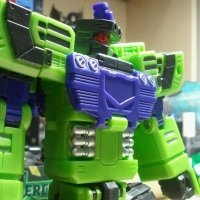 Considered the best ‘Constructicon’ ever made, TFC Toys had teased transfans with TFC Exgraver. Today a Chinese transfan had a chance for a better close up on this first limb of Not-Devastator Hercules, and it has been made public in Toys Daily.

TFC Exgraver is the first of six limbs released and he is the ‘Not Scavenger’ figure. Exgraver forms the right arm of ‘Not-Devastator Hercules’.

These batch of released images of the figure also features the figure in its original box on Weibo page. Images depicts Exgraver in his boxed form, vehicle, robot and gestalt arm mode.

This neat looking figure is now available on Robot Kingdom for $77.90. Check out the shots after the jump.

Dark Of The Moon China – Biggest Opening Ever

testing…exgraver is an awesome homage to g1 constructicon.

testing…exgraver is an awesome homage to g1 constructicon.