Argos, one of UK’s most popular retailer has provided first sightings of the latest upcoming Transformers Prime figures dug out from their catalogs.

The figures were some Revealer class figures such as Hot Shot and Vehicon, Cyberverse Vehicle Energon Driller with Knockout and Voyager Optimus Prime and Megatron.

Revealer Hot Shot is making full use of Bumblebee’ mold as base mold with a retooled head giving him a new identity. He is blue in color with some sport decalling.

Vehicon is as sleek as the first edition version with slight physical difference.

Energon Driller is a bad-ass vehicle so far featuring Knockout as the pilot adding more variety to the already cool Cyberverse line up. 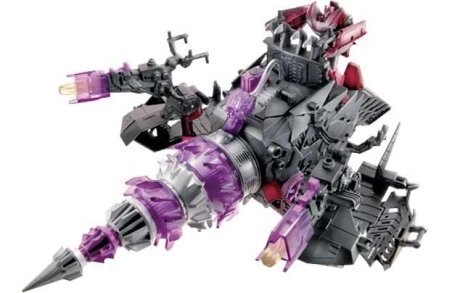 Voyager Optimus Prime will appear as Wave 1 and as suggested, it will be using the same mold of the original Voyager with some cosmetic changes in the forearms and windshield of the chest where they will be made in translucent plastic. He comes with a gray sword and translucent blaster.

Megatron will be Optimus Prime’s wave-mate seem to be similar as the figure appeared earlier who was mistakenly identified as Cyberverse Commander Megatron.

These figures were referenced in a pre-order list last revealed last week.

As for other development, some new terms have been introduced in Transformers Prime such as Powerizers. From the description obtained, Powerizer is an innovation in transformation where users can simply scan the Powerizer with Smart Phone and see the power of Transformation. Not sure how it works, but this certainly is something new! As part of the new Powerizer line, this figure will have flowing Energon and light-up weapons.