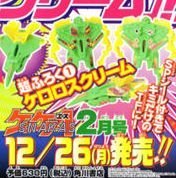 EZ class figures not dead yet! Kadokawa Shoten’s Kerokero Ace magazine announced that their upcoming issue for January will include a neon green “Keroroscream” toy on 26 December. Keroro Gunsō is the Japanese name for the science-fiction comedy manga Sgt. Frog, which is the inspiration for the magazine’s name.

The magazine describes the toy’s arrival as a “lightning attack by a mysterious super lifeform” — a reference to Sgt. Frog’s story about an alien sent to Earth to prepare for an invasion. It is also a nod to the first Transformers show’s Japanese title, Tatakae! Chō Robot Seimeitai Transformers. 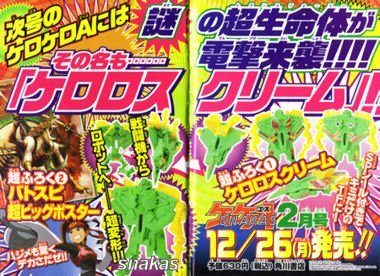 Sgt Frog to leap as a Raptor!

The toy referenced is actually a recolored Legends Class toy (EZ in Japan) of the movie Starscream character. Just like the character, the miniature toy transforms from an F-22 fighter jet to a robot. What is cool is the toy comes with special sticker seals for personal customization. Not too puny for decals after all!