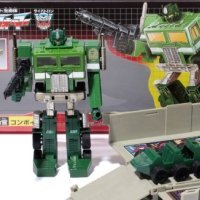 BAPE, a Japanese men, women and kids clothing outlet is celebrating the upcoming live action movie – Transformers Dark Side Moon in Japan, with its very own Transformers campaign.

The campaign consist of an exclusive A Bathing Ape (Or BAPE) G1 Optimus Prime in green camo colors thanks to its joint collaboration with Takara Tomy prior to that release. Thes figure is dominantly green in colour and scheduled to be release on 23rd July 2011.

Other than this “G1 Convoy BAPE Version”, BAPE has revealed many Transformers themed T-Shirts as well.

In-hand images of the recently revealed BAPE Exclusive G1 Optimus Prime repaint have already found their way onto the Chinese toy site ACToys. Take a look at all the green awesomeness after the jump.