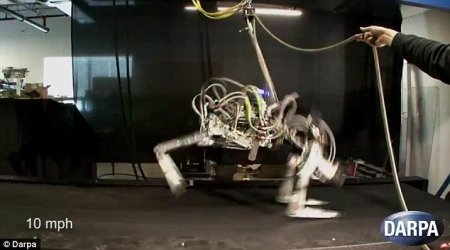 It resembles the cat-like Decepticon Ravage, seen in the Transformers 2 movie – but this one is real! U.S engineering firm Boston Dynamics has built the world’s fastest legged robot and called it, unsurprisingly, Cheetah.

In tests recently the speedy machine managed to run at 18mph, which means it would be able to outrun most humans, though it’s doubtful it could keep up with Ravage. The previous record for a legged robot was 13.1 mph, set in 1989 by MIT’s Planar Biped. Cheetah was built for the U.S Defense Advanced Research Projects Agency (DARPA) and will be added to its impressive robot arsenal.

The four-legged machine has an articulated head and flexible spine – and its movements are patterned after those of fast-running animals in nature. The robot increases its stride and running speed by flexing and un-flexing its back on each step, much as an actual cheetah does.

The current version of the Cheetah robot runs on a laboratory treadmill where it is powered by an off-board hydraulic pump, and uses a boom-like device to keep it running in the center of the treadmill. Testing of a free-running prototype is planned for later this year.

Real Cheetahs – the faster animal on land – can reach speeds of up to 70mph, and the company are hopeful their robot will be able to match them pound for metal.

The company hopes the prototype will eventually hit between 20 and 30mph. The Decepticon robot, meanwhile, had two machine guns on its back and infiltrated a top-secret U.S base, before being defeated by Bumblebee.

It could be a while before we see anything like that in the U.S Army’s arsenal.