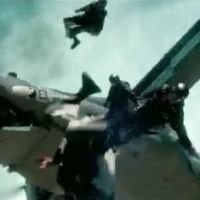 Transformers Dark Of The Moon: The Wing Suit Experience

Jon DeVore, manager of the Red Bull Air Force, is one of the world’s most renowned wing suit flyers, and was an integral part of the flying sequences in the movie.

Find out what it’s like to hurtle through a city when the cameras are rolling, and come behind the scenes as we experience Australia’s only vertical wind tunnel in action. Transformers: Dark of the Moon is out now on DVD and Blu-ray.