Of all the news that we reported last week about the production of Transformers 2: Revenge of the Fallen, from the first set photos to the announcement of the official title, nothing seems to have stuck out more in my mind then the revealing of one of the latest transformers, known as Jetfire.

The reason this is so significant is because when I heard about this particular character, I was instantly reminded of the fact that I had plastered my walls as a young boy of photos of the SR-71 Blackbird reconnaissance plane, the single most badass flying machine on the face of the planet. It has held the records for absolute speed (over 2,000 mph) and absolute altitude (85,068 ft.) and once made the trip from New York to London in 1 hour 54 minutes.

So you can see why any alien lifeform would choose such a machine as their Earthly form. And in Transformers 2, this character is rumored to play a big role in the film. 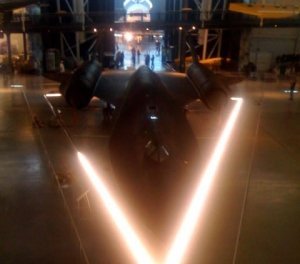 Right now we know this for sure, thanks to some spy reports and photos from the Transformers Live Action Blog, the production has moved to the Smithsonian Institute’s Steven F. Udvar-Hazy Center in Chantilly, Virginia, the resting place of one of the retired SR-71s. John Turturro, Shia LaBeouf and Megan Fox were all on hand to shoot scenes in and around the museum, including a few scenes that were in the same room as the Blackbird (seen in the photo above). As well, from the photo below you will see that Bumblebee makes an appearance as well, as the yellow Chevy Camaro concept car was also on scene.

You may also notice in the photo above that there is another covered vehicle next to Bumblebee in the parking lot of the museum. According to a set report over at SuperheroHype, this is either a Toyota Matrix or a Scion xA, but no one is sure as of yet. Either way, with the custom paint job and the crew’s attention to keeping it covered, we can safely assume that this is another new transformer. 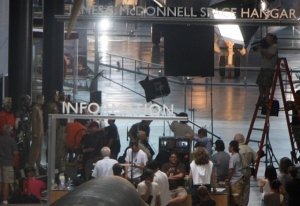 Also notable is the fact that Michael Bay has been jetting around the country from location to location in a private jet marked with an Autobot logo on the tail (seen below). That, as Mr. Bay himself would probably say, is certainly very awesome. 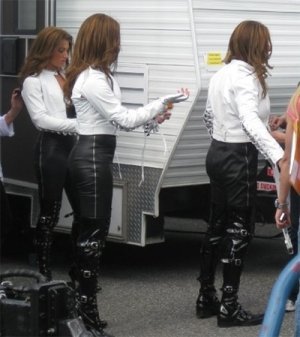 For more photos, check out the report over at Transformers Live Action Blog and for a full set report, we would recommend the one over at SuperheroHype!