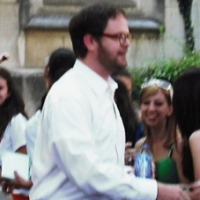 Michael Bay revealed a couple new details in an interview with the New Jersey Times. The story picks up with Mikaela Banes (Megan Fox) visiting Sam Witwicky (Shia LaBeouf) at a fictional East Coast school with an Ivy League feel.

Apparently Banes didn’t have enough money to go to college and was left behind in Los Angeles. And while the first movie was about a boy and his first car, Bay says that the new movie “is all about Sam growing up and going to college … a teenager growing into a man.

” Rainn Wilson was spotted on set the same day that they were shooting a scene where Sam is late to his Astronomy 101 class, which might mean that Wilson is Witwicky’s Astronomy professor. Photo to the right thanks to TLive.

Josh Duhamel who played Captain Lennox in the original film tells Empire Magazine that the biggest change in the sequel is “who [Lennox is] working with “, emphasizing the “Who he’s working with.” This seems to confirm speculation that the Autobots might have to form an alliance with the Decepticons to fight something bigger. Could those rumors about Fallen actually be true?

And for those wondering, the cool “Revenge is Coming… 2009” set-up pictured at the top of this post (thanks to KD), was on display at The My Little Pony Fair 2008 (who knew?), which took place at Hasbro, Inc.’s Providence, Rhode Island headquarters last week.