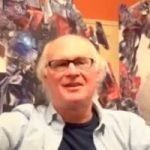 After the season of Transformers Dark of the Moon was over, the talks about Transformers 4 has been looming ever since. The movie was really successful that Hasbro was immediately in talks about having the next one soon after shooting TF5 as well back to back.

Based on the most recent interview conducted by Italian site Badtaste with Scott Farrar the person behind the visual effects for Transformers Dark of the Moon, he stated that there is still certainly a future for the next Transformers movie as:

“Transformers 3, Dark of the Moon, was incredibly successful… these are making more money every time, and so success certainly gets people talking, and thinking about we should make another one possibly.Paramount has asked me and I’m willing to do another one, I’m happy to do another one, and they’re talking with Michael Bay about that. I don’t know if or when it’s going to happen exactly, but you know, we’d love to do it.”

Farrar’s statement sum up that:

While all these is still treated as hush-hush, lets just wait the 9th when Hasbro is going to make an announcement  during their Investor Day.