As we get closer to the June 24 release of “Transformers: Revenge of the Fallen,” there’s a ton of new robots in disguise that fans are looking forward to seeing onscreen for the first time.

Among these is Arcee, a pink Autobot with an extensive series history, set to become the first female Transformer in the live-action movies. But according to Michael Bay, you might not want to get too attached to her.

“You know what? I didn’t like Arcee,” the filmmaker revealed exclusively to us Thursday night, “so I kill her later, all right?”

We caught up with the outspoken filmmaker at ShoWest, where he received a Director of the Year award. The special-effects-driven Bay told us that technological advances since 2007’s “Transformers” are allowing him to grab more articulate, complex performances from his metallic leading actors — but still, at least one of his fictional stars turned out to be a bit disappointing.

“You know what? It’s like actors,” he explained, comparing his Transformers to flesh-and-blood stars Shia LaBeouf and Megan Fox. “There are certain actors that blossom on screen, and there are certain others where you’re like, ‘Yuck, I’m cutting them out of the movie.’ ”

So Bay decided to kill Arcee — a pink motorcycle who can be glimpsed in the movie’s trailer during a chase scene in Japan.

As some fans might remember, the death of Jazz in Bay’s first “Transformers” film not only served as a reminder of the severity of the robot war, but also became one of the film’s most touching moments.

In the sequel, however, Bay was so eager to kill off Arcee that he had no desire to milk the moment for emotional impact.

“This isn’t sad,” he grinned, discussing Arcee’s sudden death. “This is just ‘get it out and get it over with.’ ”

Bay also shot down the long-simmering rumor that Fox will be seen riding Arcee and doing some female bonding with the character. “No,” he insisted. “She has nothing to do with Megan.” 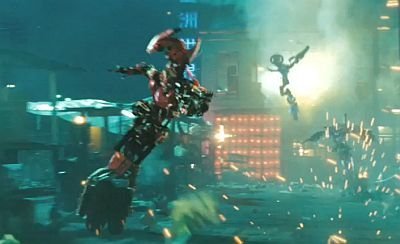 With that, Bay said he was eager to get back into the editing room and finish work on one of the year’s most anticipated movies. And if there are any Arcee fans out there who are sad to hear about the character’s upcoming demise, well she should’ve given a better performance, Bay said.