On set, a new red 4×4 truck has also been spotted, glowing and undamaged, it stood out promi­nently from the miscellaneous burnt out cars. This has now been con firmed as Rollbar — his name is spelled out on the vehicle and he sports the Autobot logo.

Rollbar doesn’t have a big per­sonality within the Transformers franchise (or much of any thing beyond being many different toys), with this character Bay is free to recreate as he pleases. Add to all this, the cardboard head of Megatron has been thrown into the mix.

The folks over at TFW2005 investigated the ‘T B’ logo on the back and found that it stands for “Tommy Built”, the jeep wasn’t originally built for the movie and a clip on YouTube showed it with a mounted machine gun on the rear, Paramount pictures have sinced removed the video.

However, not sure if this is coincidental, ‘TB’ is also a pseudonym for ‘Throttlebots’, where Rollbar was originally a member in the G1 series. Colour wise, it sure is had almost the same paintjob as Alternators Rollbar. 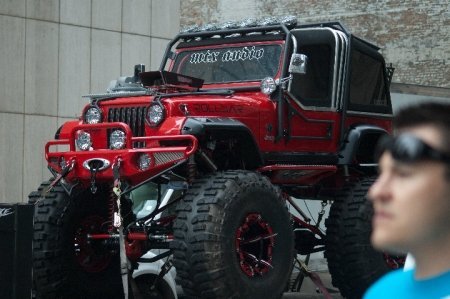 The name is written on either side of the hood of the vehicle and sports an Autobot logo on top of the Jeep logo in front of the doors. Based on the video posted by the same Youtube member who took the original video that introduced us to the vehicle shows that a Gatling gun will be mounted on that metal bracket mounted on the back of the vehicle.

A human being is capable of operating that machine gun while standing behind it.