Transformers Fans At Expo Get Tips On Building Their Robot Armies

TransMY was featured in The Star again. However, this is a backdated news about TransMY’s involvement in the most recent Queensbay Transformers Expo Jun 29 – July 3rd featured in The Star, 23rd July 2011 exclusively for Metro North – Penang. Read on:

TRANSFORMERS fans flocking to admire their favourite robotic aliens at an Queensbay Mall in Penang received tips on how to collect the toys.

Members of Transfans Malaysia (TransMY), who participated in the Transformers Expo 2011, engaged with collectors and gave them useful advice on their hobby.

TransMY founder C.Y Wong said they advised people on ways to control their finances and to collect cautiously without ending up broke.

“We guide them on what to collect first and how to find certain collectibles which are not available in Malaysia,” said Wong.

“We teach them how to source for these items from other countries such as China, Japan and Singapore,” he said. 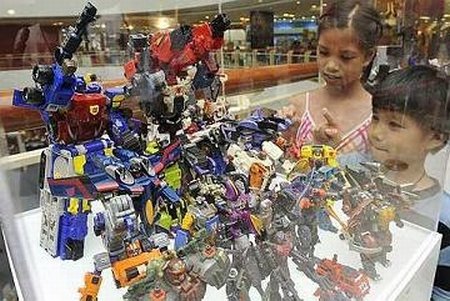 The four-day event held recently featured over 1,000 collectibles, including a life-size Bumblebee action figure which attracted a lot of shoppers.

Many could be seen having their photographs taken with the figure.

Note: This is a TransMY edited version on naming error of the founder and the group’s name.