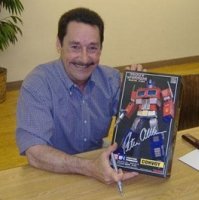 The main draw of Transformers — whether it be in an after-school cartoon or a blockbuster feature film — is that it features giant robots changing shapes. But a deeper appeal is what hasn’t changed. Peter Cullen first provided the voice of Autobot leader Optimus Prime in 1984 when Transformers (known to fans as the Generation 1 era) was created.

Prime was killed off in the 1986 movie version of the series, a move that simultaneously confused Cullen and permanently scarred movie-going children everywhere. While Transformers continued in various forms over the next two decades in cartoons and video games, it wasn’t until Michael Bay’s gargantuan film adaptation in 2007 that Cullen returned, a move embraced by longtime fans who otherwise might not have cared.

Cullen has solidified his hold on Prime with the Transformers films (the third installment, Dark of the Moon, hits screens this summer) and in the new animated series, Transformers Prime, which has just begun airing nightly at 6:30pm ET on The Hub with a five-part miniseries called “Darkness Rising.” He took some time to talk with me (Note: his speaking voice sounds much more like Eeyore from Winnie the Pooh — another voice he performs — than the leader of the Autobots) about how Prime has changed, and hasn’t, over the years, and why the character has stood out over his long career:

You’ve performed the voice in Optimus Prime in several incarnations now. Do you approach him as a different character each time, or is he the same as far as you’re concerned?

I am convinced that he is the same. The basic character makeup of Prime hasn’t changed, although the circumstances do certainly, and the plot of course. He remains constant, and that has been probably one of the driving forces for me to see that consistency and to have my feet firmly planted in that role. It gives me a sense of confidence to know he hasn’t changed. I have never felt any change that was significant enough to have me think otherwise.

What are some of those traits that you can keep going back to when you play him?

There is a sense of honor and integrity and decency that he has and these are I think attributed to good leaders and to great leaders. I recently wrote a forward for a book on Prime, and I [referenced] my brother, who is a former Marine Corps captain, who served in Vietnam and he had seen considerable battle experience. He was the one who guided me through the audition process in my brain because I told him I was going to do a hero, a cartoon character, and he told me, “Peter, don’t be a Hollywood hero. Be a real hero. Don’t go over the top. Be in control. Remember, you can be tough and gentle, too.” That’s what I took to the audition and the words that I read just jumped right off the page when I heard my brother talking, and out came Optimus Prime with those guidelines that he gave me. Those traits are there consistently, and they have never been compromised. Looking back, when I was a kid, our heroes were embedded in good, whether we knew it or not. Roy Rogers, the heroes of the day, they were always the good guys, with a sense of compassion. I think Optimus Prime kind of goes back to the storyboard heroes of modern times, so I have little problem in expressing those emotions, because I grew up with those older heroes.

I know this doesn’t affect you necessarily, but Optimus Prime has a visible mouth in this incarnation. Does it look funny to you?

There’s some things to get used to, but nothing alarming for me. I actually look forward to the designer changes in one way or another, because there’s nothing … it’s not a face-lift, and he’s not going in for plastic surgery. He’s made of metal. He can compose the look of today, much in the way they would coming out with the new design of an automobile. I don’t let that affect me whatsoever, in fact it is kind of exciting to me to see the changes made. I’m impressed with all of it. The concerns that people had for Generation 1 going to the feature film, I followed some of the blogs on that, and the concerns were emotional and sentimental: “Don’t touch my Prime!” It was generally accepted, pretty much 100 percent, given the excitement and adventure of the movie itself. I thought it was pretty extraordinary, to tell you the truth.

Your old nemesis, Frank Welker, is back as the voice of Megatron. That has to be fun to resume your rivalry.

Stacey, I have to say that it was probably one of the greatest thrills knowing that Frank was coming back. To be in the studio with him, working again … we had been distant from each other because we’re always on different shows, and getting the opportunity to be back on the mike with him brought back so many great memories. He of course had been the king in my mind, the cream of the crop. We have so much fun together in the studio battling each other with sound effects or impersonations of one another, and we’re constantly breaking each other up. There is an adage that he uses frequently saying that his ambition is to get me to laugh when I’m taking a drink of water so that it will backdraw through my nose and hopefully out my ears one day. You really have to be there to see some of this stuff, because he can get me at a very important time, or at a serious moment, before I’m having to plead with him, “Frank, please don’t!” It’s such a pleasure to be with him.

The original Transformers cartoon is a touchstone of youth for many people, but it’s just one of hundreds of credits you have on your resume. Does it stand out to you much, the experience of actually doing it?

It does. When I auditioned for the role of Prime, I didn’t know much about him before I went to the audition place, and there he was, an 18-wheeler, a Kenworth, and I said, “Well, this is revolutionary. Bold, imaginative, new.” I’d never seen anything quite like that before, and I’d been to many, many auditions. It did stick out as being a challenge, if nothing else, until I read the character breakdown and it was pretty much straightforward as a real living hero. A real leader. With that, I just dove right in, but I was overwhelmed, to tell you the truth, at the success of the show over the years. Frankly, I was rather dismayed and confused when I was killed off in the feature film in 1986, so I didn’t think too much of anything after that until the reprisal back in 2006 for the 2007 movie with Michael Bay.

The world of Transformers is so vast now, having been around since 1984, how much of that is important for you to know for any given scene, or do you just focus more on the scene at hand?

The plot at hand, how it’s written. What is the objective of the show? How is it going to end up? I try to temper that with as much of Prime as I can get out of Prime. It’s difficult to do that when you’re first beginning a new series because you can’t really judge where the mythology is going to go and how precise you’re going to be, but given time it comes through. We’ve done 26 shows so far and I feel basically pretty much the same as I did when I recorded Prime for the very first time back in 1984.

So what are your thoughts on the new show, so far?

I like it. I love the combination of [executive producers] Bob Orci and Alex Kurtzman have come up with, the contact with the human element that was pretty much missing in the original. It gives it a much more broad scope and he can now deal with human issues, which is very important for Prime, because he is such a leader and he can parlay the tributes and the moral attributes of man. It’s very strong, and working with the cast — they’re a wonderful cast, it’s a privilege to work with every one of them. There is a respect that was missing in a lot of cartoon shows that I’ve done before, although you respected the talent that you were working with. It may have been an animated animal show based on comedy and silliness, and you had no idea what the future was going to be for a show like that, but with Transformers, there’s a built-in respect, and they’ve earned it. It’s a worldwide status that they’ve earned, so you feel that in the studio. Everybody knows that they’re working with something quality and strong and proven. So there’s a sense of respect that comes out of that that we all enjoy, and it really is a different environment than I’ve ever worked in before.

Are people surprised to hear the other things you’ve done, like Eeyore, or Duck Tales and, hey, you were the Predator?

Yeah, they are, but I’ve never really vocalized any of that in large settings. It’s pretty much information that comes out through the Internet. I’m always delighted when somebody will have researched me a little bit to find out some of the things I’ve done. I’ve done K.A.R.R. [from Knight Rider], the Predator, Eeyore — which, I am no longer Eeyore for some reason. It was never explained to me, but they recast Eeyore in this new executive changeover at Disney.

So the new Winnie the Pooh movie that’s coming out, that doesn’t have you in it?

I was stunned. I didn’t understand that at all. But oddly enough, they have me in the cast list. But it’s another guy that’s doing it. For the life of me, I couldn’t explain that. But that’s just Hollywood.

Did your recording for this series run the same time as your schedule for the next Transformers movie?

I’ve been recording now for about a year with Michael Bay, and I’ve had some wonderful experiences. I went down to an airport hangar in Long Beach and worked with some of the on-camera actors and that was a wonderful experience to be a part of the movie on the technical side, because normally I’m just pinned into a small room in front of a microphone by myself. That’s why, again, the series to me is rewarding to me because it gives me an opportunity to be working with all the other actors, which normally I don’t do on a feature film.

I had a pretty good chuckle when you did one of David Letterman’s Top 10 lists as Optimus Prime. Is that about the strangest thing you’ve been asked to do as Prime?

Kinda. I had no idea how it was going to turn out, and when I did watch it live I realized that David Letterman had no idea who Prime was, and he even expressed it, “I don’t know if I like this guy.” … I gotta tell you, I was rather charged by the whole thing because I was on the David Letterman show. Good grief!