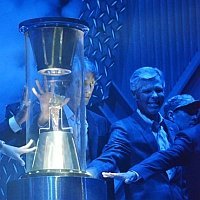 We already had a scene by scene preview on the previous entry on The Ride and here’s CNET Asia’s swift review on Transformers The Ride that was launched last Friday:

Theme park Universal Studios Singapore (USS) has finally launched its latest attraction, Transformers The Ride. This simulator combines a moving vehicle with 3D imagery to put audiences in the middle of a fight between the Autobots and Decepticons. It is open to visitors starting from today and can be found in the Sci-Fi City zone of the theme park. We got a preview ride and here are our thoughts. Also see our gallery and the video below for more visuals of the attraction. 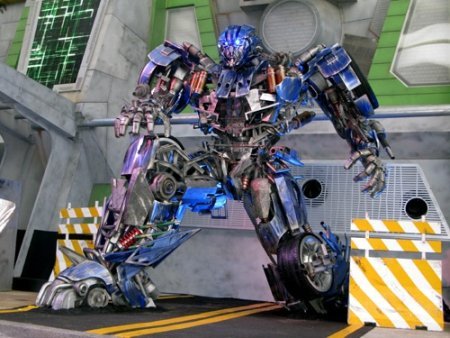 Entering the area, the first thing that greets you is a statue of Evac, the protagonist of the attraction. This Autobot was created for the ride, and is a transport robot. 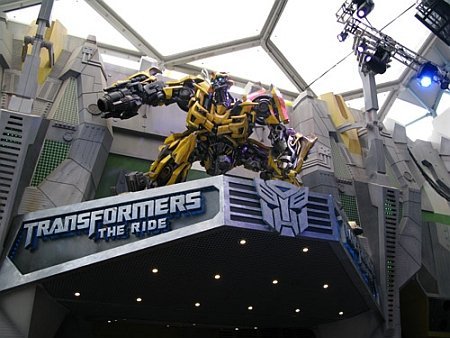 Bumblebee perched atop the entrance.

Also featured prominently is one of the most popular Autobots from the Michael Bay movies, Bumblebee. This marks where the queue starts–be prepared, it’s still a long way to the ride, especially if there’s a big crowd.

Along the way, you will get the back story through the screens scattered throughout the waiting area. These include commentaries from the human leader of NEST, a military command and control bunker and from the Autobot Evac as well. 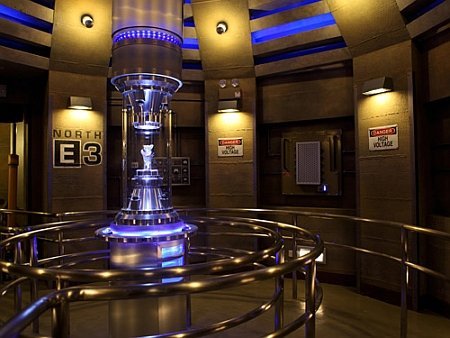 The cause of all the trouble.

Around the middle of the queue, you also get a view of the AllSpark fragment that’s central to the plot of the story. During the ride, you follow Evac as he tries to keep it out of the hands of the Decepticons.

Because it uses 3D imagery, passive 3D glasses are required for the ride. You will then be ushered to a 12-seater car, which is the vehicle mode for Evac. 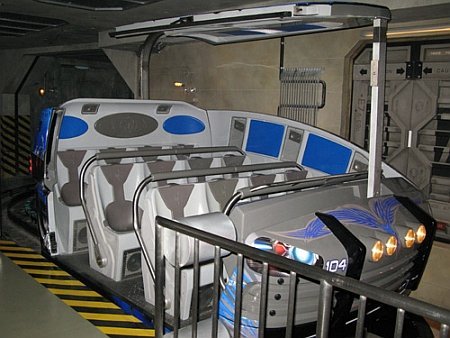 12-seater which is supposed to be Evac in vehicle mode

Unlike roller coasters that require you to have nothing on your body, this motion simulator lets you carry your bag onto the vehicle. Loose items can also be placed in the pocket in front of you.

The ride starts with you taking possession of the AllSpark and follows with the item changing hands many times between the Autobot and Decepticon robots. 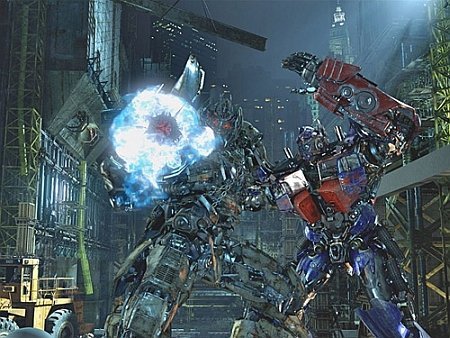 Megatron fires a missile at the audience

Even though the vehicle does not move as vigorously as rides such as the Battlestar Galactica attraction (also found in the Sci-Fi Zone of USS), the sensation of movement is greatly enhanced by the 3D imagery. In one scene, the Decepticon Starscream pulls Evac into the air, dragging him through skyscraper offices. The rocking motion of the vehicle along with the shrapnel flying at you does indeed give the sensation of the rider being in the situation.

This happens many times throughout the show, so you’ll find yourself dodging missiles and putting your hands in front of your face as a robot hurtles toward you. In addition, hot air, water and fog are utilized to simulate explosions and getting hit by a projectile, increasing the reality of the experience. 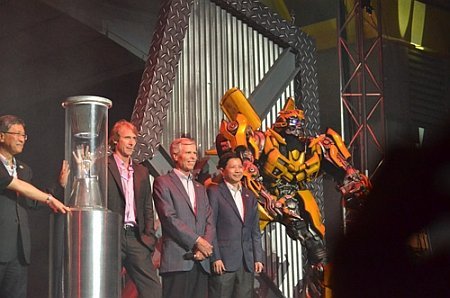 We won’t go too much into the details of the plot, in case it spoils the surprise for those visiting the attraction. We will say that though it isn’t as heart-stopping as a roller coaster, the (relatively) long 4-minute ride is every bit as entertaining. It is also more accessible as children above 102cm can be admitted, compared with the minimum 125cm requirement of Battlestar Galactica.

Universal Studios Singapore is located on Sentosa island and tickets for entry can be bought online or at the gate. Visit the Web site of Resorts World Sentosa for more details.