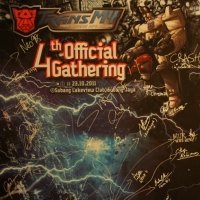 It was an auspicious day for TransMYians as this is the day that we have all been waiting for the past 4 years since the last 3rd gathering in 2007. Since crowd control is vital, we have changed the format of our gathering by organizing it in a confined space and this time we have selected Subang Lake View as the venue of our gathering.

As per tradition, our gathering are normally run by a committee  and as part of the committee, each member played a role as a small unit to do preparation. Just like any normal event, the eve is usually the busiest. The last task we did was prize wrapping. 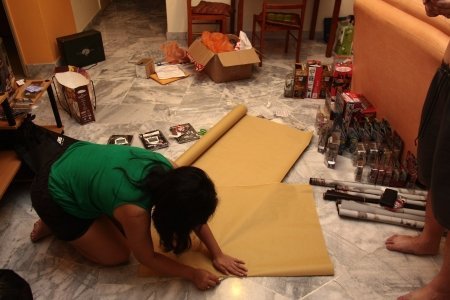 On the morning of the 23rd, enthusiastic members have been arriving as early as 10.30am. IT team was among the earliest, followed by transportation unit, journo unit and the founder-cum-coordinator. The first thing we did was arranging the tables and the electronic equipment. 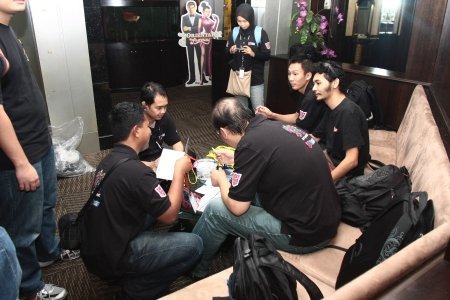 Registration unit is doing their thing

We the setup an ad-hoc registration unit manned by Zodie and Vic who will mark the attendance of each registrant. During the process, a booklet and lanyard complete with personalised ID tags were distributed. Members who ordered t-shirts came to claim and change to them upon arrival. At the time the registrations was in progress, our venue hall was being cleaned by the management. 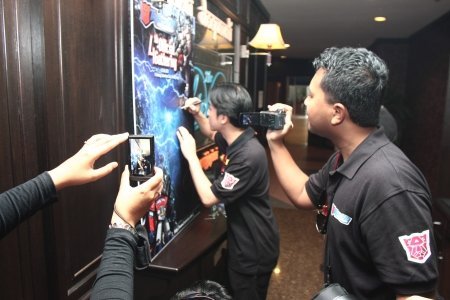 After registration, members proceed to sign the placard banner to mark their attendance. The placard was placed behind the reception desk as allowed by the management. 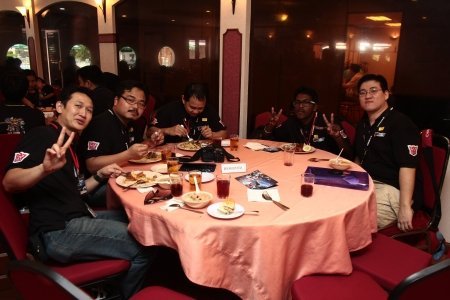 Around 12pm, we proceed to our buffet lunch and 6 tables were made available to us already. The foodies were very welcoming as they offer a lot of variety of foods from starters to entrees with a variety of salad, BBQed meat, congee, soup, noodles, desserts and ice-cream. 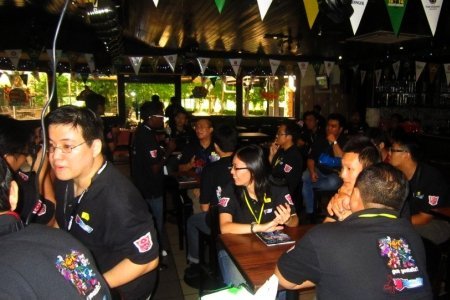 Early scene upon entering the venue

The 2 hour session was the best time for pre-ice-breaking between new and old members. Registration unit took turns between meals and duty to sign up late comers. At around 1.15pm, we entered the hall after the cleaning has been completed. While IT unit is taking their place to finalize the setup of the projectors, the hall has start filling up. 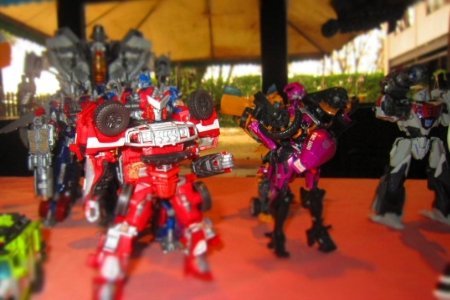 Toys for display, not for sale

A table for a mini toy display have been setup as well for members to display their prized, rare and latest Transformers. on there we can see a plethora of Transformers ranging from exclusives such as the gold Ultimate Bumblebee, some customs and quite a number of the latest wave of Dark of The Moon figures were put on show.

Just before 2pm, IT signaled us to get started as the had sorted a small minor glitch on the projector setup. Our MC for that day is Chris, our Competitions & Prize Unit guy along with co-founder, Mike as the co-MC. 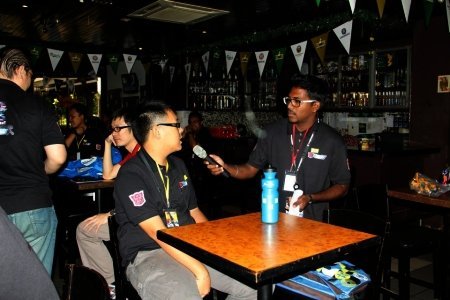 The first activity of the day is the official ice-breaking session. Though it was seen as insignificant, this session is actually a core activity that is important for members to get to know one another. Since our mic was in abundance, our MC took turns passing the mic to each and every attendees for a chance to talk.

After a session of talks, we proceed to a session of ‘watch’ where a set of videos were already prepared prior to the gathering. They were contributed by Bearmafia – TransMY Promo video and also Sentinel Primus who presented the 1U event Setup Night MV with a catchy Beastie Boys hip-hop number. The videos were played back to back before another session of a short presentation by Admin Prime. 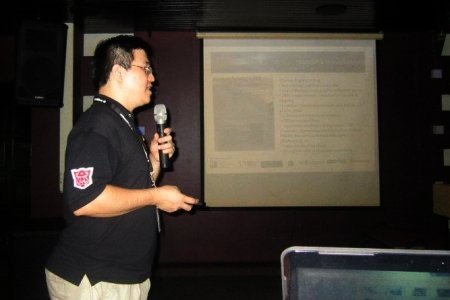 The presentation was about ‘Transformers in The Eyes of TransMY’. The content is a manifestation of how Malaysian fans feel about the franchise expressed online. The findings were put on charts and tables with comparison made to other non-Transformers franchises as well. 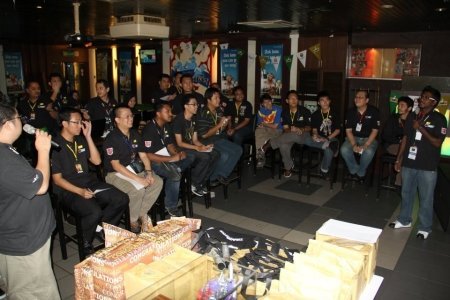 Eager beavers in the challenge

Enough of serious stuff, the session was followed by a series of games. The first one is the most anticipated ‘Guess That Transformer’ competition. Our competitions have been selected from the polls that we run before the gathering starts around one month ago. Therefore, by having them in the gathering, we are actually listening to the demands of the members. 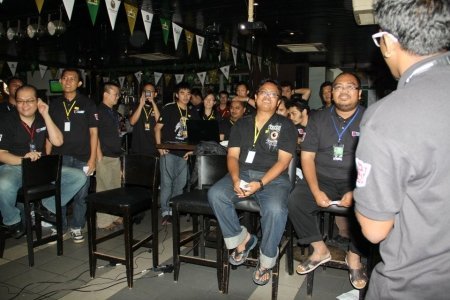 The competition is easy peasy as participants only need to answer a part of a robot displayed in the Powerpoint slide. Those who answered wrongly will be booted out, and the ones who got them correct will have a chance to remain. The competition lasted for nearly 12 levels before the winner was announced. The funniest part of this competition is the G1’s are the most hardest to answer that axed many participants. Symon appeared victorious as he became the champion of the competition followed by Hafeez and Takato. 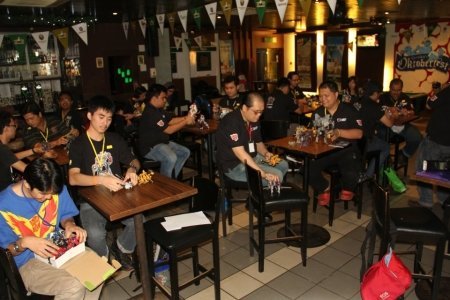 Without wasting much time, we proceeded to the next competition which is the ‘Pose That Transformer’ competition. The competition allows 20 person as one time with each person allowed to bring 5 Transformer of any class, line or size. For each round, a theme will be announced and the participants must pose them based on the themes given. 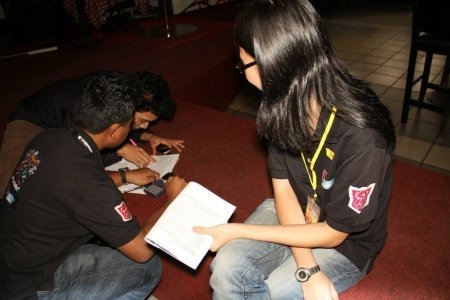 They were only allowed 2 figures per task and they are allowed to interchange them for the next task. They were given 3 minutes to pose and once the time ends, they need to stop. Our judges – Becky, Hafeez and Zodie will go from table to table marking them based on accuracy, creativity, knowledge, impact of action and overall. The overall champion for this competition is Muscular_Convoy followed by Takato and Ahtiam. 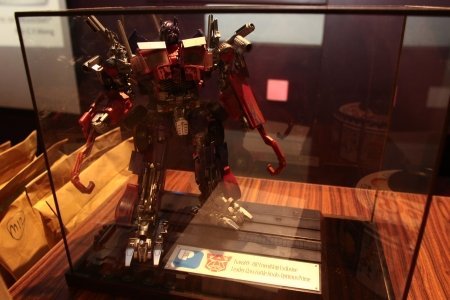 During the gathering, we also presented a custom project supervised by Becky to be presented to UIP for public viewing. The custom was a leader class Battle Hooks Optimus Prime redecoed based on UIP’s directive – aubergine, blood red and olive green. 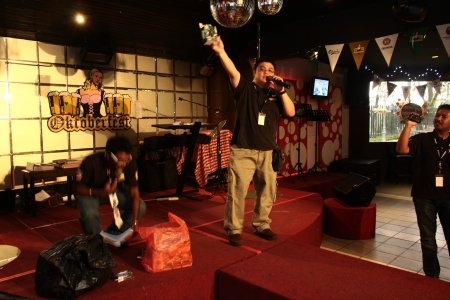 Coming to the final of the gathering, we proceed with a short session of auction. Since auctioneers is not many, the session ended almost very quickly with few big sales taking place. 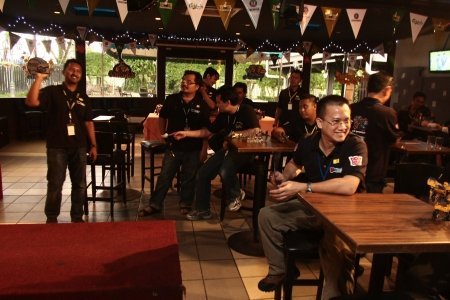 Lucky draw was the most happening session of all as we were lucky this year to have a lot of sponsoring parties to contribute goodies for our ’cause’. Among them were UIP, V-Hobby, 1-Toys, Crefigz and Robotica. The goodies are worth RM3000 and each category – members and GOC get to draw twice. 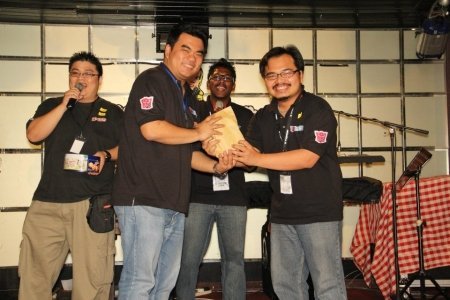 Among the big prizes from the lucky draw 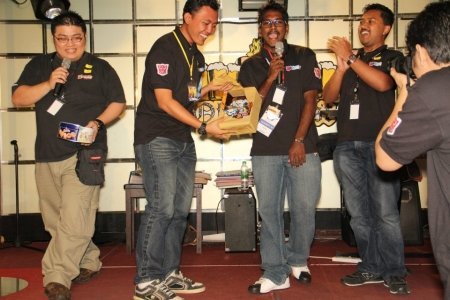 Everyone is a winner

The lucky draw took around half hour to finish with everyone seen clinging to something! From posters to stationary and toys to decal, we have a plethora of goodies to give away to our members as a form of appreciation all these years. Apart from that, we also announced the winners for the earlier competitions to claim their prizes. 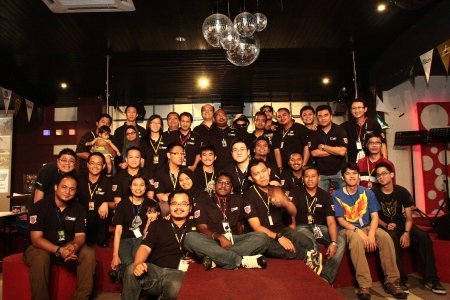 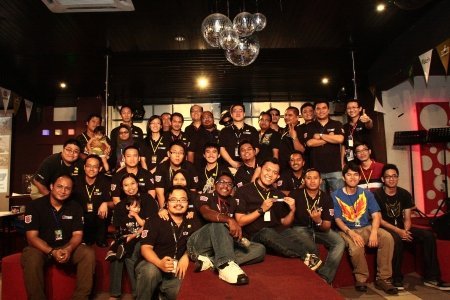 Our event eventually went on schedule as just before the clock strikes 6pm, we are concluding our session with a photography session and an autograph session specially segmented in the booklet for this purpose! 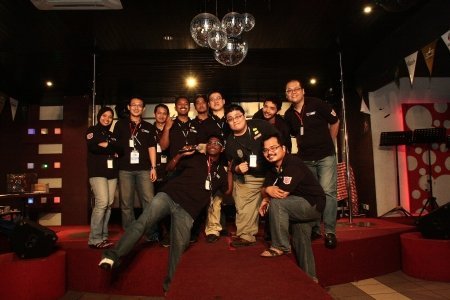 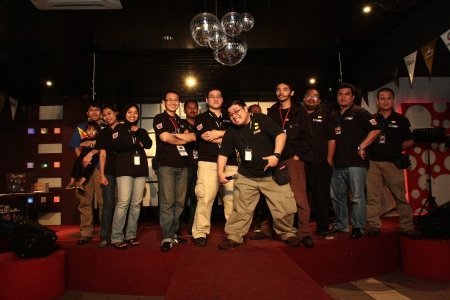 Special thanks goes to our Gathering organizing Committee (GOC), all members who were present and not forgetting our sponsors – UIP, V-Hobby, 1-Toy, Crefigz and Robotica. Thanks for making our day joyous and meaningful! Till all are one!