Universal announced today in Variety that it, “has paired up with Hasbro and DreamWorks Pictures to produce a “Transformers” attraction at its parks in Hollywood and Singapore set to open in early 2011.

Ride will use 3D-HD footage with special effects, robotics and track to place humans in the middle of a war between the friendly Autobots and evil Decepticons, who can turn into cars, trucks, planes and other vehicles.”

“Transformers” will replace the “Backdraft” and special effects soundstages on the lower portion of U’s Hollywood park. Construction begins after Labor Day.

Also, from our original post we had been tipped to some more info, that fits right in with the plot of the ride given above, “One of the concepts involves an amphibious vehicle that guests will board and quickly find themselves in the middle of a battle between the warring giant robotic space aliens. Which robots will it feature? Don’t know for sure but according to our tipsters, the designers were told that some of the robots could not be used because they will not be surviving the second film and third film.” 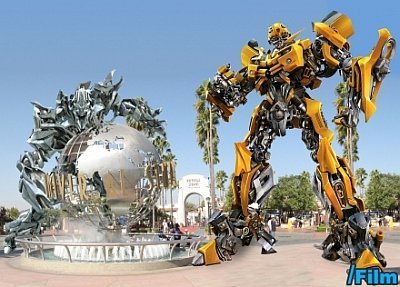 The time frame we gave – between Transformers 2 and 3 – also proves accurate. UPDATE: We just received the official press release about the ride along with a few concept art pieces to share!

The attraction will fuse 3D-HD media, mega special effects and stunning robotics with a ride system that will transform perceptions of theme park experiences. The rides are scheduled to make their debuts in early 2011, first at Universal Studios Singapore and then at Universal Studios Hollywood. In “Transformers,” Earth’s humans are caught in the  middle of an intergalactic war between the friendly Autobots and the evil Decepticons, which are able to change into a variety of objects, including cars, trucks, planes and other technological creations.

Tom Williams, Chairman and CEO, Universal Parks & Resorts, said: “‘Transformers’ will be a jewel in our collection of world-class rides based on great movies. We’re thrilled to be collaborating with Hasbro, DreamWorks, director Michael Bay and the film’s executive producer, Steven Spielberg, who has been responsible for so many of our signature rides and attractions.” Steven Spielberg serves as creative consultant to Universal Parks & Resorts and has worked closely with the company in the creation of some of the world’s most innovative theme park attractions. Those attractions include Jurassic Park-the Ride, a featured attraction at UP&R parks in Orlando, Hollywood and Japan, the E.T. Adventure at Universal Orlando and Universal Studios Japan, and the “War of the Worlds” sets at Universal Studios Hollywood.

Larry Kurzweil, President and Chief Operating Officer, Universal Studios Hollywood, said “‘Transformers’ represents a perfect match for our theme park: an exhilarating blockbuster with a great story, clever humor, non-stop action and flawless special effects. It has all the elements necessary to become one of the world’s most exciting theme park rides and a centerpiece attraction at Universal Studios Hollywood, The Entertainment Capital of L.A.”

“We are thrilled to be working with Universal Parks & Resorts and DreamWorks to create this ‘Transformers’ attraction because we believe it will deliver an ultimate one of a kind immersive ‘Transformers’ experience for our fans around the world!” said Brian Goldner, President and CEO of Hasbro, Inc. Tan Hee Teck, Chief Executive Officer of Resorts World at Sentosa, the mega resort that is home to Universal Studios Singapore, said: “It is great that Asia will be the launch pad for the first Transformers attraction. Transformers was introduced in the United States in 1983 but traces its roots to Asia. Optimus Prime, Bumblebee and Megatron are familiar names to Asian audiences, who grew up with the robot toys and love the movie. When Transformers opens in Universal Studios Singapore in 2010, it will be the first of its kind in the world. We may see a surge of Transformers mania.

Director Michael Bay and Executive Producer Steve Spielberg presented “Transformers” in 2007. “Transformers” broke box office records on its way to gathering worldwide gross revenues of over $706 million — the highest non-sequel gross of any movie in 2007 — and three Academy Award nominations. The sequel, “Transformers: Revenge of the Fallen,” is scheduled to be released by Paramount Pictures in the U.S. on June 26, 2009.