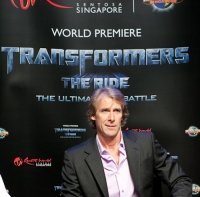 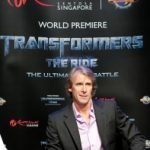 Transformers The Ride is officially open by celebrating it’s grand opening with style. Bumblebee in Camaro form made a special appearance being driven out by the Transformers movie maker himself, Michael Bay.

Michael Bay has also served as the ride’s creative consultant and he did not rule out the possibility of another Transformers sequel after being asked by journos.

Bay along with the other guest of honours assembled around the Allspark shard protected behind a glass capsule. All four then touched the Allspark that activates the lights and sounds marking the official opening of the ride.

Optimus Prime and Bumblebee, both standing around 3m long, partky mechanised made special appearance standing on the flank of the stage waving at the audience.

The Ride with already a multitude of positive comments flowing in promises to bring the ultimate 3-D battle between the Autobots and Decepticons with groundbreaking visual effects by Industrial Light & Magic, a division of Lucasfilm.

The Ride was dubbed as one of the most expensive rides at Universal Studios Singapore at the moment.

Mr Bay said: “I tried to help them sculpt the story and figure out what type of shots we’d like to do, what type of characters we can use. They also had some great ideas…..on how the simulators work, how it mixed with the photography and the shots that we need.”

Universal Studios is expected to yield in one of the highest attendance and gross for all time in December. The same ride will make its debut at Universal Studios Hollywood by May next year.