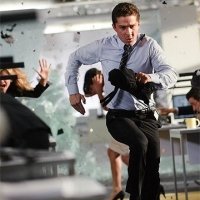 We have heard this once before, and we are hearing this again – Shia LaBeouf will not making a comeback for a role in the next Transformers movie, but expects the franchise to be rebooted in the future. Sam Witwicky, who Shia reprise his role as in the films, is a role he’s played since the initial 2007 version was released. Transformers: Dark of the Moon, is due out this summer and the star has confirmed it will be his last appearance in this franchise.
“For sure,” he replied, when asked if it was really his last turn as Sam. “I’m not coming back to do another one. I don’t think Mike [director Michael Bay] will either. It still is a hot property, I think, especially coming out of the third one. So I imagine they’ll reboot it at some point with someone else.”

Although Shia is happy with his decision to concentrate on new projects, he knows it’ll be strange if someone else starts playing the character. He’s vowed to support any future movies though, as the franchise means so much to him.

The 24-year-old is fiercely proud of the upcoming release, insisting fans are going to love it. It’s been given a new flavour as Megan Fox has left, with Rosie Huntington-Whiteley playing Sam’s new love interest Carly Miller.

Shia was happy to do some of his own stunts for the picture, as was his co-star Josh Duhamel, and thinks the cast’s adventurousness really shows.

“[It’s] the best movie we’ve made, I’m serious,” he said. “It’s not a joke. I’m dead honest, man. I get myself in trouble all the time, but this is our best instalment. It’s our best movie.

“Michael did the 3D in a different way than anyone has ever done it before. James Cameron has seen the movie; he said it’s the best 3D since Avatar.”

1U Transformers Dark Of The Moon Rollout Week