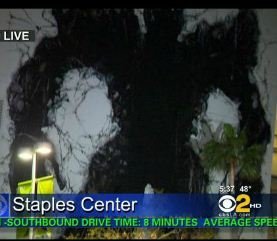 Smoke could also be seen coming from piles of rubble outside the sports complex as frightened onlookers chanted, “The end is near!”

The park is calling its new attraction, which features 2,000 feet of track and 14 gigantic screens, “the most ambitious ride ever.”