The Arrival #2 features two stories, Brizuela on "Attention Surplus Disorder,” while Matere's work can be seen in the backup story “Whatever Happened to Whatisname?”.

In the backup story “Whatever Happened to Whatisname?”, Isenberg teams with artist Marcelo Matere to tell the untold tale of what became of a certain DECEPTICON after his defeat by the AUTOBOTS. The answer may surprise and disturb you! Matere and Animated Series director Irineo Maramba each provide covers.

Next week, on Wednesday the 17th of September will see the release of the Shane McCarthy written series "All Hail Megatron #3", as well as the third Spotlight Trade Paperback, featuring Spotlights: Blaster, Arcee, Grimlock, Mirage, and Wheelie. Transformers Animated: The Arrival #2 will retail for US$3.99. 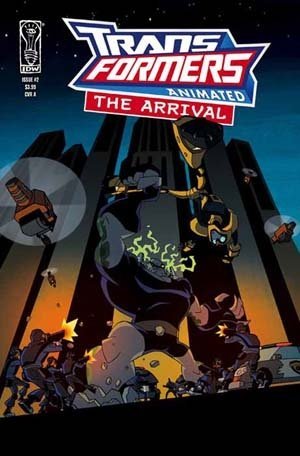