This power-packed release features all 52 episodes from the long-running 2005 Cartoon Network series based on the classic program from the '80s. TRANSFORMERS CYBERTRON: The Ultimate Collection includes hours of adventures full of intrigue and surprise and is the ultimate gift set for fans of the legendary "robots in disguise". The seven-disc set will be available for the suggested retail price of $61.99.

Synopsis:
CYBERTRON, the TRANSFORMERS' home planet, is on the brink of destruction as an ominous Black Hole looms. In order to save their world, the TRANSFORMERS embark upon an intergalactic scavenger hunt across the universe searching for the lost Cyber Planet Keys. The evil DECEPTICONS, villains unlike any you have seen before, are in a race against the heroic AUTOBOTS to recover the Cyber Planet Keys – keys that have the power to unlock the CYBERTRON planet itself, creating the greatest TRANSFORMER the universe has ever seen! The battle will span the galaxy in a race to wield the all powerful keys and save their home world of CYBERTRON from certain doom! 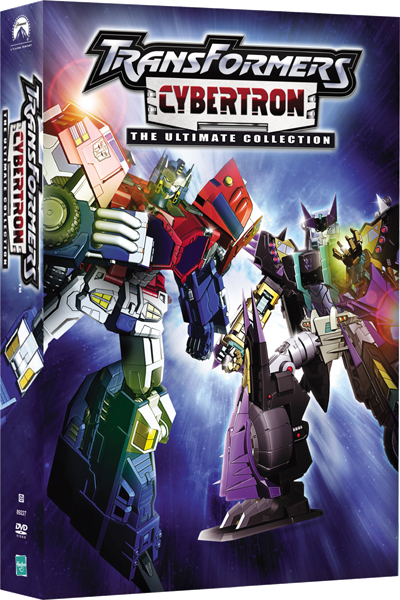 The TRANSFORMERS CYBERTRON: The Ultimate Collection seven-DVD set is presented in full screen format with Dolby Digital English Stereo. The collection includes all 52 episodes from the series and has a running time of 19 hours, 4 minutes.

About Hasbro
Hasbro (NYSE:HAS) is a worldwide leader in children's and family leisure time entertainment products and services, including the design, manufacture and marketing of games and toys ranging from traditional to high-tech. Both internationally and in the U.S., its PLAYSKOOL, TONKA, MILTON BRADLEY, PARKER BROTHERS, TIGER, CRANIUM and WIZARDS OF THE COAST brands and products provide the highest quality and most recognizable play experiences in the world. ©2008 Hasbro, Inc. All Rights Reserved.