Skids Is Not Misinformed In China

It is more evident that Michael Bay’s misinformation campaign about the twins – Skids and Mudflap is wrong. To date, as a tie-in to Transformers Dark Of The Moon, Shanghai General Motors’ sub-brand Chevrolet (雪佛兰 – Xuě fú lán) has just rolled out the “SPARK MYSELF” campaign to promote the new ‘Chevrolet Spark‘ in the PRC.

The new model officially launched in the Mainland last week at the 2010 Guangzhou Auto Show (although it was technically first introduced in Shanghai in April 2010).

The vehicle is known in China as the “斯帕可” (Sī pà kě) — a phoenetic translation of the English title. It will retail between RMB77,800 — RMB88,800 (£7,700 — £8,700). For those car geeks amongst you, the ‘Spark’ is also known as the Daewoo Matiz, and both vehicles are currently produced by General Motors in South Korea. 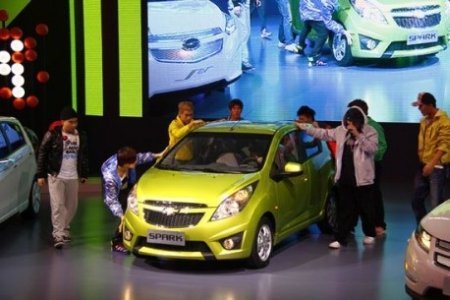 If these technical details are making you yawn already please do not be perturbed — things are about to get, at least a little, more interesting. With that in mind we will look at the following aspects of Chevy’s marketing implementation – Beijing / Shanghai launch parties, Transformers: Dark of the Moon Endorsement, TV commercials and Online campaign.

Shanghai’s Red Town venue hosted the official launch of the ‘SPARK MYSELF’ campaign on Christmas Day. Urban art, music and technology were the core themes of the launch party. According to the ‘SPARK MYSELF’ ‘Douban’ page around 440,000 people were interested in attending the Shanghai event (of course only a lucky few were able to attain tickets).

The next party / youth showcase will be held in Beijing on 8th January 2011 — already 120,000 people are ‘interested in attending’. 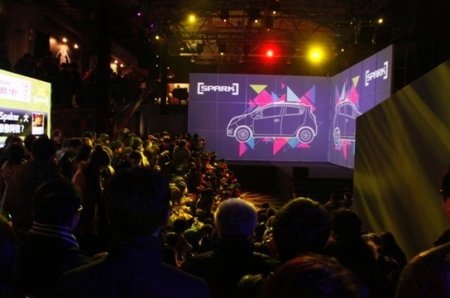 The Shanghai party was quite an extravaganza, below are some of the various things that went on:

As you will have seen in the above video, the vehicle itself was used as a canvas for a seriously impressive 3D light show. Party-goers were encouraged to “spark” themselves by creating grafitti cartoon characters on the walls. As well DJ’s playing live throughout the night, the opening music at the event came courtesy of the Chinese band “Black New New”. 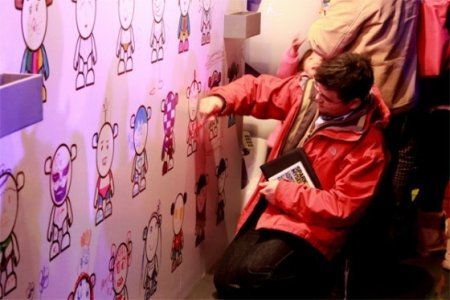 Aside from the light shows and music visitors found themselves surrounded by interactive games and technological delights including a live micro-blogging wall. Yes, I think it is ridiculous title name too but nonetheless a range of Chevrolet vehicles have featured in the last two Transformers movies.

In the previous films the Chevrolet Camaro has been used as the star Transformer ‘Bumblebee’. The second film, ‘Revenge of the Fallen’ introduced viewers to ‘The Twins‘. These two transformed into the Chevrolet ‘Beat’ and ‘Trax’ respectively. For the third film titled, ‘Transformers: Dark of the Moon’ The Twins’ vehicles have been upgraded to…yep you’ve guessed it, the new Chevrolet Spark. Transformers is loved in China, I particuarly remember the popularity of last year’s Meters/bonwe ‘Transfashion’ campaign. So as with the previous two films, the Transformers collaboration is promoted heavily as part of the new Chevrolet campaign.

To see how Chevrolet utilised the Transformers endorsement for the last film, check out the Chinese mini-site: http://transformers.chevrolet.com.cn/. Asides from the launch events, Chevrolet has also released four amusing TV commercials. Each of the ads demonstrates the different benefits of the Spark. Sina and Douban pages, and a mini-site have been created to promote the new vehicle. These have been picked up already by a large number of Chinese netizens with many posting photos and engaging with the sites.

Finally, should you be living in the Mainland you can still apply for tickets to the Beijing party / youth showcase on the 8th January 2011. If the Shanghai party is anything to go by. and you are lucky enough to get tickets, then you are certainly in for a treat.