But, it looks like the Autobots may have an answer of their own in the form of SUPERION. SUPERION is itself made up of five "aerial robots" working together to form SUPERION.

The mighty union of the five AERIALBOTS, SUPERION thinks of little else besides destroying any DECEPTICONS he encounters, and protecting any innocent bystanders nearby. The robots that combine to form this powerful warrior are experienced teammates, working in tandem to see that the AUTOBOTS emerge victorious from the fire of THE ANCIENT WAR.

Ok real quick, out of those five robots, which one would you NOT want on your team. How much help is an "easily distracted daydreamer" during a fight? He's like the fat kid no one wanted on their team. So I'd say, want to beat SUPERION in a knife fight? Go for the left arm… 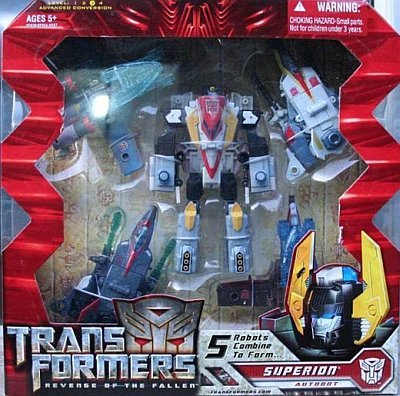 In the original Generation 1 universe, SUPERION was also made up of five smaller robots but what's being called Airazor for the film was Slingshot. SUPERION is able to fly at speeds of 800 miles per hour for a distance of 5,800 miles. SUPERION was also in Generation 2 and Energon but with different incarnations. 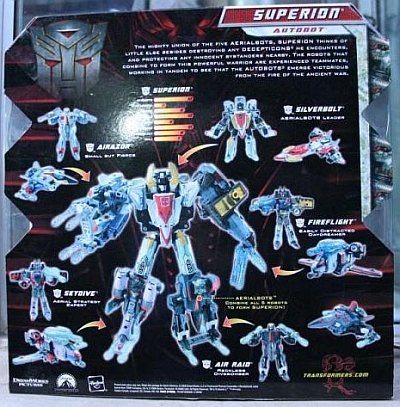 Will Optimus Prime use the SUPERION combiner robot to battle the Decepticon combiner DEVASTATOR in the highly anticipated sequel? I don't know but now we've got the names of six more robots making an appearance in the film. Plus a bit about a possible plot involving what's being called "THE ANCIENT WAR." Something tells me we are going to be seeing a lot more of Cybertron this time around.

UPDATE: Transformers fans are adamant that SUPERION will not be in TF2, I've been told the packaging is from the movie, but Hasbro pulled a George Lucas and just threw the Energon repaint into the ROTF packaging to make more money off the toy's release.