The box shots did not contain the actual figure.  These images of the mock-up, which were snapped at the 2009 Toy Hobby & Nursery Fair currently taking place, provide confirmation on spoilers that have been floating around, as well as the character's bio.

First of all, let's get it out of the way: Leader Jetfire will combine with Leader Optimus Prime. This combination has been rumored since last September, and hints lending credence to this rumor have popped up in recent months.

Features of the Leader class toy include light up eyes and chest and electronic speech and blasting sounds. The Mech Alive gimmick will reveal moving armor panels and internal gears of the figure.

Michael Bay told French magazine Premier Cine Live that the film features “an old Transformer, who loses screws and bolts at every move” and is voiced by John Turturro.

Agent Simmons (also played by Turturro) users one of the tracking devices he used in the first film to locate Jetfire, who has since retired and is in the form of an SR-71 Blackbird. 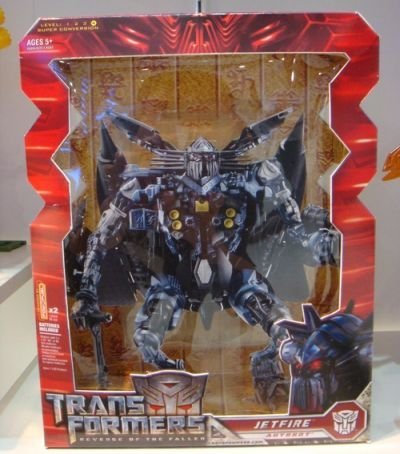 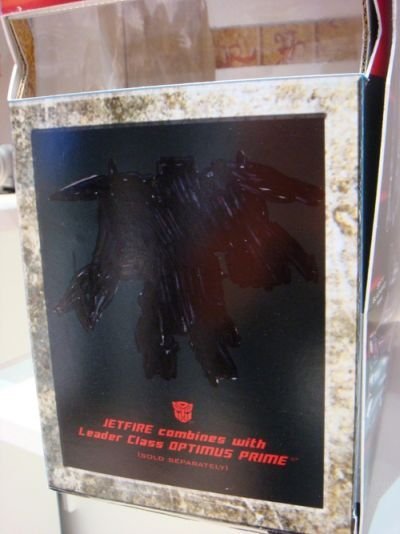 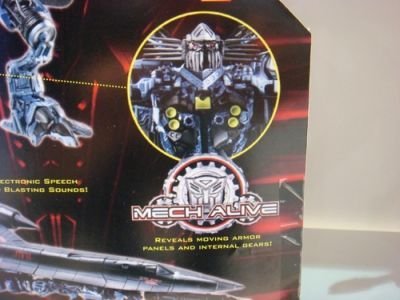 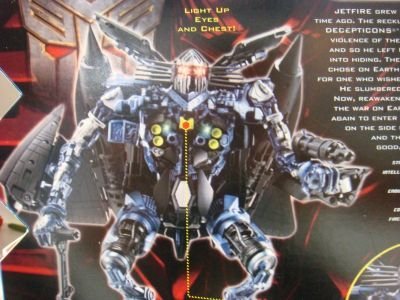 The shots also reveal the character's bio:
JETFIRE grew tired of war a long time ago. The reckless ambition of the DECEPTICONS, and the senseless violence of their war sickened him, and so he left CYBERTRON to go into hiding. The form he eventually chose on Earth seemed appropriate for one who wished to remain unseen. He slumbered in peace for years. Now, reawakened by the arrival of the war on Earth, he decides once again to enter the fight – this time on the side of the AUTOBOTS, and this time to end it for good, whatever the cost.
Strength: 8
Intelligence: 8
Speed: 9
Endurance: 4
Rank: 5
Courage: 7
Fireblast: 9
Skill: 5

What is the betting that the Blackbird in question is the one on the USS Intrepid in New York City. Been there for ages which ties in with the fact Jetfire has "..slumbered in peace for years."

As for the major spoiler. Well on the back of the Jetfire box it states "Jetfire combines with Leader Class Optimus Prime". So looks like Prime will be bulking up in an old school Combo a la Devastator.