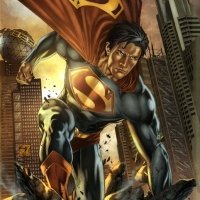 RICHARD DONNER, director of 1978’s iconic Superman: The Movie starring Christopher Reeve, breathed life into a legend and made us believe a man could fly. And he says Zack Snyder is the right person to make the hero soar on the big screen again. Snyder was announced as director of the new film earlier this month and Donner is confident about Warner Bros’ choice.

Donner, who went on to direct such films as The Omen, The Goonies and the Lethal Weapon series, told Movieweb: “Well, I think he could do a great job. You know he’s certainly a good director and hopefully he’s got a good handle on it.” Donner (pictured right) – who says he hasn’t seen a script for the new film – adds that he hopes Snyder isn’t tempted to deliver spectacle at the expense of substance and story.

He explained: “I mean, I thought Bryan Singer did a wonderful job with the other film (Superman Returns). You could just do massive action and blow up stuff, but he chose to do the characters more, although he had some beautiful stuff in there. So I hope nobody tries to compete. “I hope Zack doesn’t try to compete and I don’t think he’s that kind of director. I don’t think he’s going to want to compete with the best effects out there.

“I’m tired of it already. I’m tired of those … what are those machines? Transformers! Really, I mean they were great but let’s settle back people and focus on the characters. The characters in Superman are just wonderful.”

At this early stage, little is known about the new film, tentatively titled Superman: The Man of Steel and due out in December 2012. Christopher Nolan is ‘godfathering’ the project as a producer, with a script by Batman scribe David Goyer.

There have been reports that General Zod is the villain but Snyder has dismissed this as “just a rumour”.

Earlier this month Zack told Films Actu: “The film will focus on early days of Superman, so there will be no links with other films. This is not a remake then. Similarly, although I still can not talk about the script, I can assure you that this new Superman will not be based on a comic book in particular.”

But then The Social Network actor Armie Hammer, 24, who is among the names fans have put forward for the next Superman, indicated Snyder’s project was taking a different direction. He told New York magazine’s Vulture blog: “I did talk to my people recently about that for the first time, and I think they’re going a little older with Superman. I hear they’re going 35, 40.”

This has given more weight to the continued speculation about Mad Men star Jon Hamm, 39, being a frontrunner. Hamm had earlier said he had not been approached but added that he’d be willing to discuss it with Warner Bros.

In an interview with the News of the World, Snyder acknowledged the “groundswell” of support for Superman Returns star Brandon Routh (with the tabloid claiming the actor may be brought back for the new film as a result) but that’s at odds with the director saying that there will be ‘no links with other films.’ Routh has confirmed he’d love to play Superman again.