Josh Transformed Fergie Into A Wife

Attendees began arriving at the private Church Estate Vineyards near Zuma Beach around 3:30 p.m., shuttled from a parking lot near Malibu's City Hall up to the hillside mansion. The sunset ceremony began about 4 p.m. and lasted about an hour.

Police were positioned outside the grounds, with tents erected outside the property's showpiece 8,000-square-foot chateau. Several paparazzi-powered helicopters hovered above. 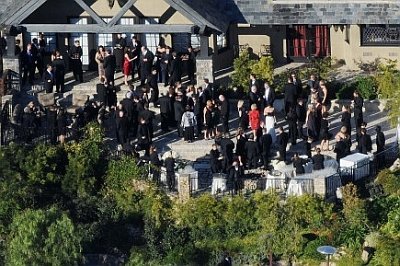 The ceremony took place in a large white tent, the reception in a black-and-white tent, and the afterparty in a pink tent that was decked out like a disco.

Every table at the reception featured large marble and crystal centerpieces with dozens of white tulips and roses. The trees on the property were all adorned with large crystal chandliers.

After dinner, there was a slideshow featuring photos of the couple throughout their lives, followed by a video with a mix of Fergie's hit songs and pals like Sims and the Black Eyed Peas dancing to the music.

The sisters of the bride and groom gave toasts, and the happy couple topped off the evening with a cake designed like a 14th-century castle.

An insider put the cost of the entire evening at around $1.5 million.

The camera-friendly pair, together since September 2004, have been planning for the big day since their engagement in December 2007, but have spent the past two weeks clearly in preparation mode.

The bride was spotted shopping for lingerie, getting facials and working out, and the couple shared a joint bachelor and bachelorette party (followed by a shower) on Wednesday.

This is the first marriage for both.