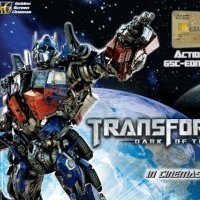 EON Bank is all out promoting Transformers Dark of The Moon by announcing competitions with amazing prizes totaling up to RM100,000 for grabs. The campaign has been launched as early as April and ends after the movie was released nationwide. 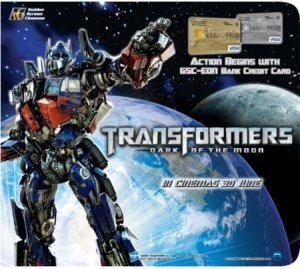 A Bank with Cybertronian Feel

Winners can enjoy a mind-blowing week in Orlando, Florida, rubbing shoulders with a veteran astronaut, witnessing a space shuttle launch, experiencing the world’s highest tandem skydive, an off-road trip in a Hummer H2, and a thrilling swoop across the waters of the Florida Everglades in a swamp buggy and an airboat?

And that’s not all, you even get to enjoy the sun, sea and surf in this all-expense-paid, once-in-a-lifetime TRANSFORMERS experience! All you need to do is be a GSC-EON Bank Credit Card holder and charge your expenses to this card between 18 April and 15 June 2011.

“At EON Bank Group, we strive to achieve best-in-class standards in delivery capabilities, customer experiences and performance excellence every day, for a lasting, fulfilling banking relationship with our customers. Hence, we continuously look for new ways to deliver value to our customers as we move towards achieving our goal of becoming ‘The Preferred Malaysian Bank’,” said Aaron Tan, Head of Cards and Unsecured Lending at EON Bank Group.

“We have raised the bar even higher with our latest campaign with the biggest movie of 2011, the highly anticipated TRANSFORMERS: Dark of the Moon, by offering customers an opportunity to win an exclusive, once-in-a-lifetime TRANSFORMERS Adrenaline Space Adventure in Orlando, Florida, as well as custom-made movie figurines and merchandise. This is our way of delivering value to our all our loyal customers. As always, they can be assured that the mechanics to participate in this campaign will be simple and convenient,” he said.

In addition to an exclusive 12-inch custom-made Gold OPTIMUS PRIME figurine, the Grand Prize winner of EON Bank Group’s TRANSFORMERS: Dark of the Moonmovie campaign will embark on an 8-days/7-nights TRANSFORMERS Adrenaline Space Adventure for 2 to Orlando, Florida.

The lucky winner and companion will get to immerse themselves in a series of thrill seeking activities, which includes:

But the fun does not end there. The lucky duo will also get to relax and enjoy four days of sun, sea and surf at Cocoa Beach, Florida, where they can take to the waters on their jet skis.

“We also have special gifts awaiting our depositors, including our young savers, as we want them to share the excitement of the upcoming blockbuster movie TRANSFORMERS: Dark of the Moon,” said Low Kee Fui, Head of Wealth Management and Liabilities at EON Bank Group.

EON Bank Group has lined up a host of promotions and activities in conjunction with its
TRANSFORMERS: Dark of the Moonmoviecampaign. Here’s how you can be among the first to get your hands on the latest TRANSFORMERS movie merchandise and collectibles:

Every RM50 spent will generate 5 contest entries for GSC-EON Bank cardholders while the same spend value will generate 1 entry for other EON Bank Group cardholders. Winners will be selected via a draw, so the more entries you generate, the greater your opportunity to win.

The Grand Prize, exclusive to GSC-EON Bank Credit Cardholders only, will be an all-expense-paid 8-days/7-nights TRANSFORMERS Adrenaline Space Adventure package for 2 to Orlando, Florida in the United States and a 12-inch Gold OPTIMUS PRIME figurine – the first and only one in Malaysia! The 1st and 2nd Prize winners will also be the first and only one in Malaysia to take home a 12-inch custom-made Silver BUMBLEBEE figurine + RM10,000 cash, and a 12-inch custom-made Bronze SENTINEL PRIME figurine + RM5,000 cash respectively.

Spend a total of at least RM100 every month at GSC outlets using your GSC-EON Bank Credit Card and you will be entitled to receive 2 GSC movie vouchers. Purchases may include movie tickets, food and beverage, and concessionaire purchases. Cardholders will need to register for the winners’ draw by sending a text message with “GSCT3 your card number” to 33188. Vouchers are redeemable at any GSC outlet from 1 July to 31 August 2011.

Those who do not yet have a GSC-EON Bank Credit Card will be pleased to learn that they will also receive limited edition TRANSFORMERS: Dark of the Moon t-shirt, delivered to their doorstep once their application is approved.

Every weekend during the campaign period, GSC-EON Bank cardholders’ who charge RM300 on their credit card in a day on a maximum of 2 receipts will be entitled to redeem 2 Premiere or 2 in-season movie passes on the day of purchase at selected GSC outlets nationwide.

New and existing Smart Junior Account holders must collect 10 fully-stamped My Savings Journey Cards and place a 3-month fixed-deposit worth a minimum of RM10,000 during the campaign period to receive a TRANSFORMERS: Dark of the Moon action figure. Each top-up of RM50 entitles them to 1 stamp.

The Top 500 depositors over the 3-month period will each receive 2 in-season passes to see TRANSFORMERS: Dark of the Moon. Open to new and existing current account and savings account holders. Excludes Save Monthly Account.

Customers who make Unit Trust Investments worth RM10,000 and above, or purchase Life Insurance with a premium of RM2,000 and above, will receive a limited edition TRANSFORMERS: Dark of the Moon movie merchandise.

Detailed information on the GSC-EON Bank Credit Card contest mechanics and promotional activities can be found at GSC-Eon Bank Card, while information on all other activities is available at EON Bank, or at your nearest EON Bank and EONCAP Islamic Bank branch.

TRANSFORMERS: Dark of the Moon is the 3rd installment of the hugely successful movie franchise. The sequel released in 2009 currently ranks as the biggest movie of all time in Malaysia. The 3rd movie will be released in 3D on 30 June 2011 in cinemas nationwide.